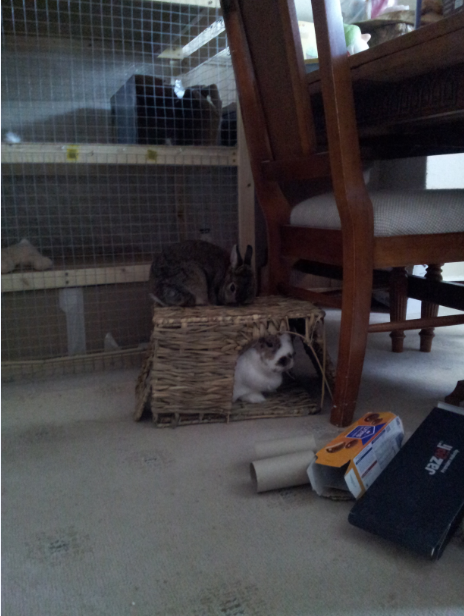 Everyone who owns a rabbit should know how to hold a rabbit properly because it’s not obvious, especially with a wiggly, squiggly bunny who can’t wait to get away and run around the kitchen and nibble those interesting looking refrigerator wires.

When I was a child, one of my rabbits escaped. It got into the grumpy old man next door’s garden. I know this, because he showed up at my front door and started shouting at my mum for the trouble my bunny had caused. And he was holding my bunny by the ears and waving him at her.

I remember being in tears at this.

Apart from that, hold them pretty much how you like. Some bunnies like a two handed pick up either side of their long body, while other bunnies prefer a hand around the ruff (guiding) and a weight-bearing hand under their bottom. Some rabbits like to be cradled like a tiny baby. They’re all different. Some rabbits just won’t let you pick them up. Katie can’t get over her early traumas before we got her, and if we need to carry her, we don’t pick her up.
We use a dog carrier that’s intended for use in the car. We open the front, place it in her run and wait for her to hop in. Usually we try and keep bunnies paired if they’re in transit so Fifer generally goes in with her. Bunnies get scared when they’re separated from their partners. We try and let Katie have the dignity that she craves and in return we know we can trust her to get into the carrier.

How are you supposed to catch them?
Some rabbits delight in running away from you when you try and catch them. Often it’s a maturity issue, and as they get older they get easier to catch (in my experience). Also younger ones have finer silkier fur so they can slip out of your grip before you can pick them up. The best solution is to persevere – the longer you chase them before giving up, the longer they will hold out for next time, so once you’ve started the chase, you have to see it through to completion no matter how long it takes, how inconvenient it is, and how scratched you get (and you will get scratched).

So be really sure you want to pick that rabbit up!

Sometimes, when I am getting Cleo to stop running away, I throw a soft fleecy blanket over her then scoop her up inside the blanket. It just gives me that little pause when she has to think about where to go, and that gives me an opportunity to pick her up (and discard the blanket – it’s done its job).

If I’ve got a particularly wriggly bunny on my hands I hold them firmly (not tightly – don’t scare them) and if I’ve got a free finger I gently stroke their nose to calm them.  If they still won’t chill out I will flip them onto their back and watch the magic of biology – upside down bunnies go to sleep.  It’s not a long term solution but if your bunny has an injury you need to check (for example) then flipping them can be a useful trick.  Don’t do it often or for very long though because even though it immobilizes them, it also stresses them out.  Tell them what a good bunny they are, reassure them and give them a treat afterwards.  Eventually they will just be still when you handle them because then they get a treat (I like fresh parsley as a treat as it’s naturally low in sugar)!

Bear in mind as well that rabbits hate their back legs leaving the ground as it makes them feel out of control in a situation which scares them and makes them stressy and wriggly, so if you need to hold or carry them for more than just a hutch transfer, you need to plant their back legs on your chest or stomach.  This will also generally calm them down.  Some rabbits will use this as a springing point to escape, these are the sort of bunnies that, if the behaviour doesn’t just fall off eventually, will probably need to be transferred and moved places in a carry box.

Have you ever had difficulty picking your rabbit up? Do you have any special techniques? Let me know in the comments.

Don’t forget to follow my blog either via wordpress or bloglovin’ if you found this helpful!