When we first got Banacek, he was a tiny baby bunny, no more than six weeks old.  He had been taken from his mother at a very young age and had been kept in an enclosure so he was lonely and scared, and freedom to roam was totally new to him.  It was love at first sight, but he was very timid (and so were we) and it took a few days for him to realise that he was allowed out of his hutch when the door was open – that he wasn’t escaping.

At first he wouldn’t go far from the safety of his hutch. 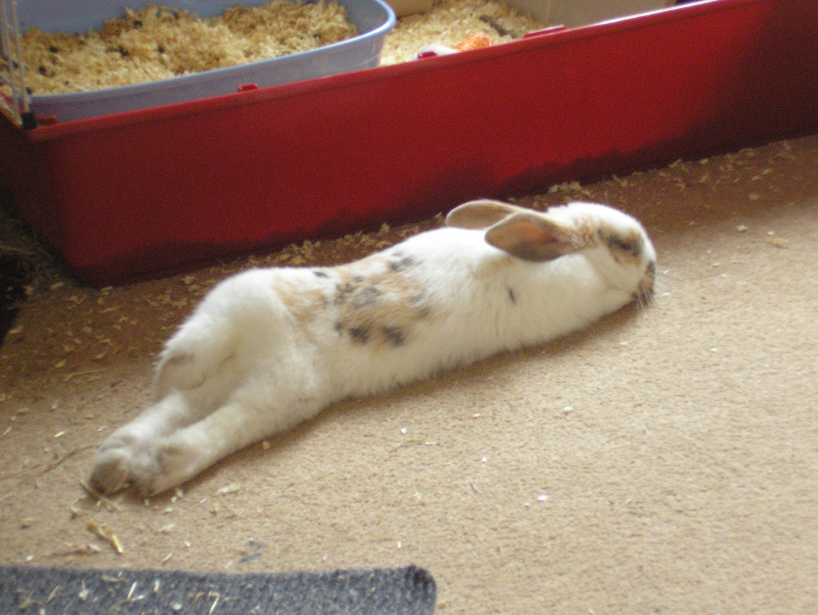 Soon he was venturing further and feeling more relaxed:

He refused to drink from his bottle, so I tried to get him to drink like this. Eventually, we just gave him a water bowl.  He also liked to eat his food on the floor with us at mealtimes: 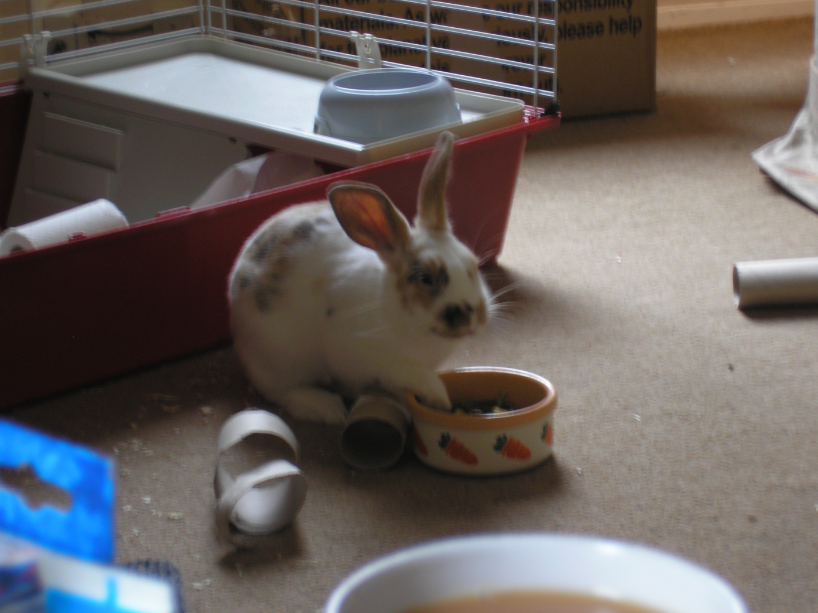 We worked hard to litter train him.  He was definitely trying to get his head around the concept, but he didn’t quite know the basics:

Then, during a misadventure, he got behind the downstairs toilet and it was REALLY manky with unknown substances (we’d only had this house 2 weeks when we brought Banacek home) so, despite the fact that we never wanted to have to do this, we had to give him his first bath.  I was adamant that he wasn’t licking himself clean when he was covered in God knows what, because I was scared he might be covered in something poisonous.  He was miffed for about 3 hours then once he was dry he totally got over it and got on with his life. 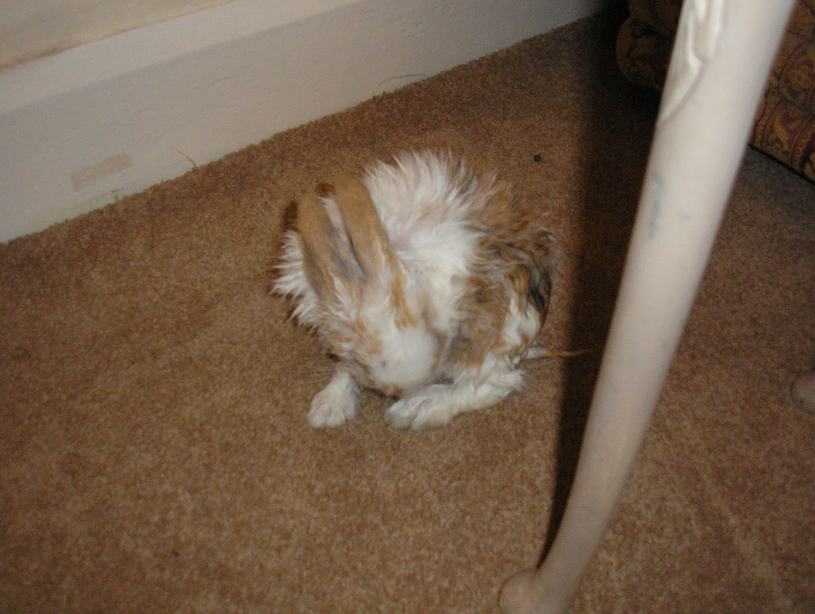 Soon, he was really settling in and starting to be part of the herd, guarding our living room from intruders:

Soon he was totally happy sleeping everywhere in our house: 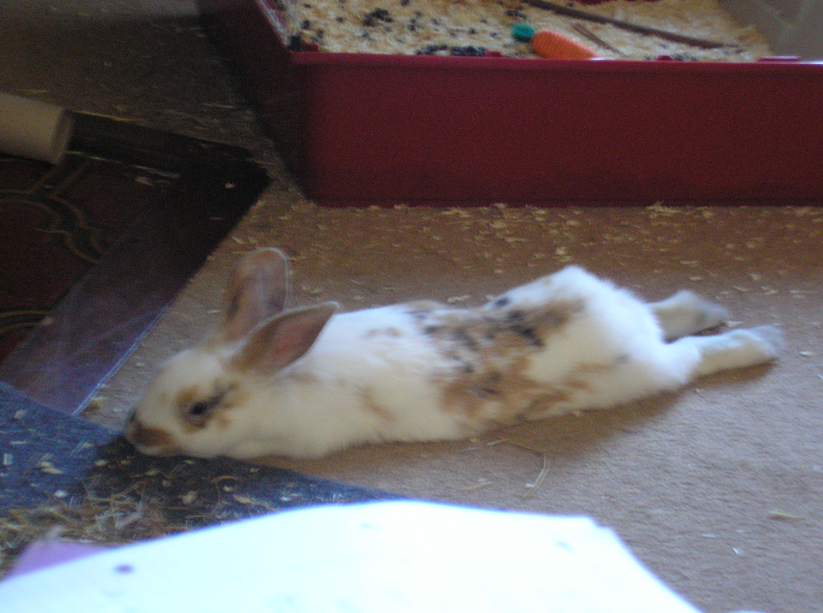 He decided to take his red cabbage into the stone square shelf he liked to hang out at. 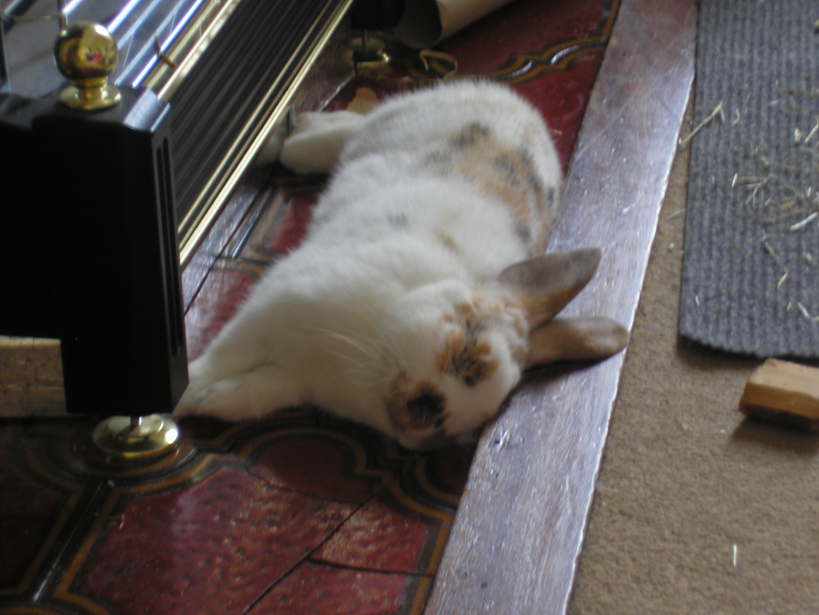 He helped us open the mail and even got rid of junk mail for us by nibbling it: 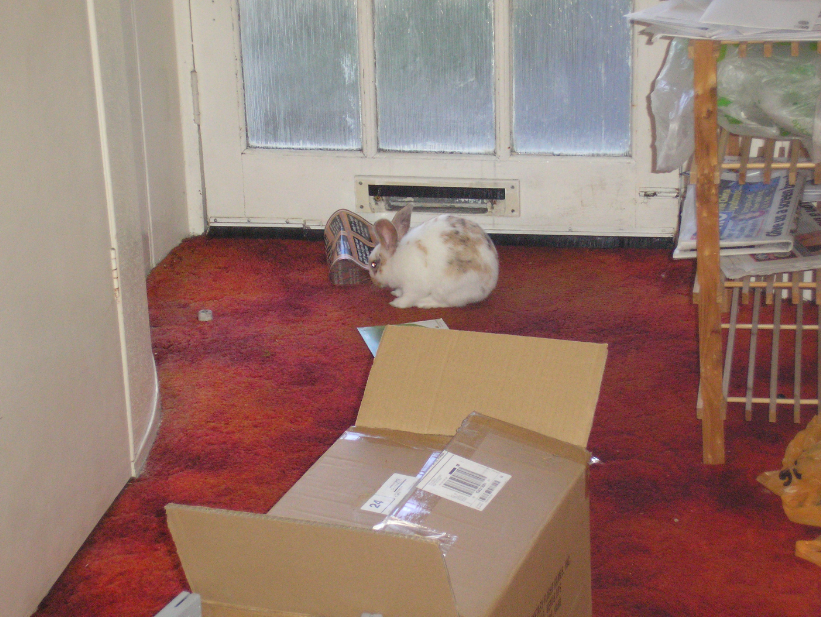 We kept him well stocked with “proper” toys as well as unwanted cardboard and what not. This was his favourite, a toy carrot patch with carrots made of wood wrapped with hemp:

At Christmas, he was eight months old, but he hadn’t finished growing:

We wrapped some muesli in paper and wrote little “gift tags” out of more wrapping paper.  It took him a while to realise they had food in them: 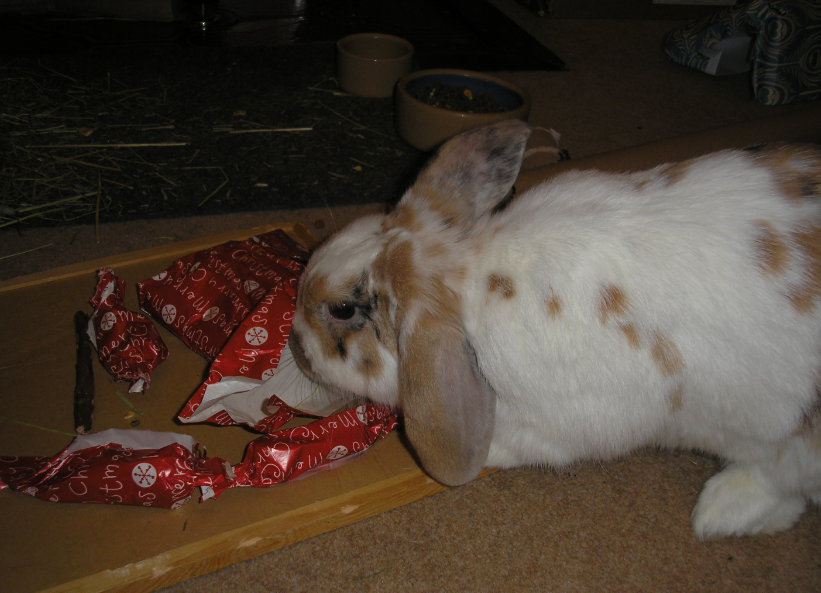 Now he is a full size, 3 year old rabbit with a beautiful 10 year old Netherland Dwarf girlfriend who we adopted 18 months ago.  Awww… they grow up so fast:

We became his family, and now he gets confused when we go on holiday and our petsitters expect him to do bunny things, like sleep closed into his hutch at night, but he humours them even if he thinks it’s weird.  When we go to bed, he sleeps in front of our bedroom door, in the doorway of his own room where his hutch is, and when we get up in the morning, he comes downstairs with us.  He is truly one of the family now.