Something nobody ever talks about is buying a map. For city-hoppers, who fly from Phnom Penh to Beijing via Ho Chi Min and Tokyo, there’s probably little need for the various types of maps I’m going to talk about. If you’re driving from A to B, however, you need a map so you don’t end up at the wrong sea.

The two types of maps you need:
1. A big road atlas.
2. Smaller destination maps – this might be an A-Z city map book or a few Ordnance Survey sheets for the wilderness.

This article is going to talk about how to choose a smaller destination maps. In case you missed it, I discussed how to choose the big road atlas last Travel Tuesday.

The humble sheet map is more often overlooked except by people who want to do some walking out of their car. In the UK, we have Harvey’s and Ordnance Survey maps, and (with the exception of OS’s 2007-onwards touring maps) they’re so good, that you would be forgiven for expecting them to cover the whole world. It’s a bit of a shock to the system to discover that our gleaming institution of the OS map is actually only a thing in the UK. Beyond, you’re at the mercy of whatever lame-ass cartographic monstrosity they’ve scribbled on a napkin to sell to tourists.

So what do you do? Where can you go to for excellent, accurate mapping information that comes in a variety of scales with familiar symbols? While Google Maps is clearly the Gold Standard in worldwide mapping, since it uses the actual satellite images to map features that are really where they say they are, the big drawback is you need an internet connection and some sort of charge to use them (unless you want to spend hours printing them out at a multitude of scales).

What’s this scale nonsense, anyway?
Basically, it’s a ratio of how much a geographical area has been scaled down to fit on a page. For example, 1:1 would mean the map would be exactly the same size as the area it covered. 1:4 would mean it was a quarter of the size of the area it covered. The best scale you can get on Ordnance Survey maps is 1:25,000 (you can see every individual house on the map at this scale) but their 1:50,000 is usually good enough for most things unless you’re really bad at reading a map. Road maps are usually between 1:200,000 and 1:500,000. Anything above 1:800,000 is not very useful in areas of dense population, e.g. western Europe, but would probably be fine in places like Kazakhstan, Russia or Sudan where there’s not a lot of stuff to fit on a page. Anything above 1:3,000,000 is useless even for Russia. At bigger scales, the width of the road is not done to scale because otherwise it would be a tiny thin line that you wouldn’t be able to see, so they make the roads wider than they should be. This confuses a lot of people but if they didn’t do it, most maps would be unreadable.

Why does scale matter?
Surely if you buy the biggest scale available, you’ll be able to cover more countries on less paper? Yes, but the problem is, as cartographers increase the scale, they reduce the amount of visible detail. First thing you’ll notice is some minor roads not appearing where they should. Then some villages will vanish. Then eventually there will just be the main roads and big cities… you get the picture. Likewise, if the scale is too small, you will quickly fill your car with paper maps, cost yourself a fortune and spend hours looking for the right page or sheet. That’s clearly no good either. Where does the balance lie between these two extremes? Only you can answer that.

Here’s a list of brands and countries that produce printed paper maps, along with the individual scales by continent and country, for those places that are hard to find maps for (and some that aren’t) If you use the “find on page function” from your internet browser menu (top right in Chrome), you can find all of the maps for any given country in this list:

Carte De Randonnees (Institut Geographique National): Sheet maps for France (choice of scales: 1:25,000 or 1:50,000) including places of interest etc. Not quite the same level of detail as OS maps and I didn’t see any contours but I might have been looking at a sheet map that covered a flat area. They retail for between £8 and £13 and you can get them in the UK in Go Outdoors, although they are 100% in French so they might be of no use to you if you’re no good at grasping foreign languages (I’m extremely lucky that I have the ability to learn many languages but I know that a lot of people struggle with this, and I can see those people having major issues with these maps).

Editorial Alpina Mapa Guia Excursionista Map & Hiking Guide: Sheet maps of Spain and Andorra (scale 1:25,000). I couldn’t open them at Go Outdoors (these maps are wrapped in cellophane) to see whether they were in English but there was a Union Flag on the front next to the Spanish and Andorran flags, which strongly implies there were English words inside. 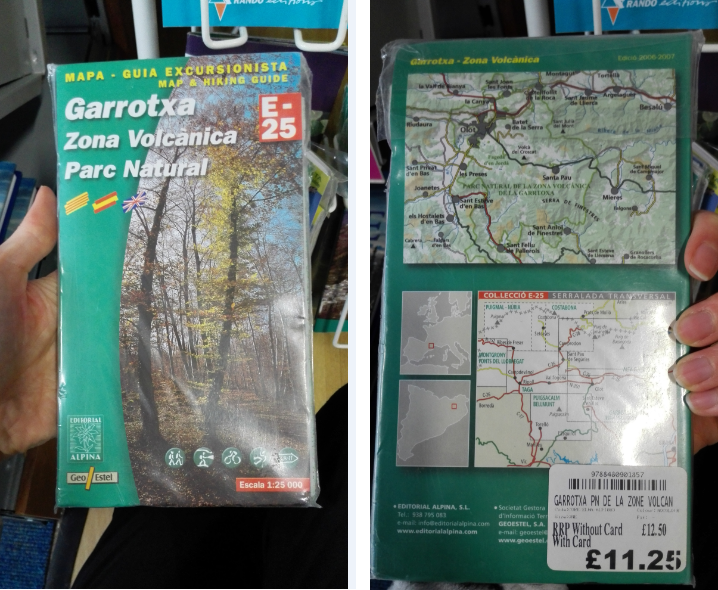 Rand McNally; Road Map of US, Canada and Mexico (one map book) (scale undisclosed but according to Amazon reviewers it’s small).

Problem countries:
Morocco: For no good reason, nobody seems to produce a map worth a damn for Morocco. For the size of the country, the scales on offer are ridiculous.

Russia: It’s a really big country. Huge, in fact. So it won’t all fit on one sheet or in one map book. There are sections for sale from Reise but if you’re crossing all of Russia you’ll need quite a few sheets. Maps of St Petersburg and Moscow seem plentiful and scales look good for these, however.

Conclusion:
As you can see, once you get past France and Spain, it appears that there’s nothing that comes close to good old Ordnance Survey or Harvey, which makes me realise how lucky we are in the UK to have two fantastic printed mapping resources as well as Google Maps. It’s very unfortunate that GPS has taken off so well that cartographers don’t produce as many printed maps any more, so if you lose your way in an area that doesn’t get a GPS signal, like Siberia, then you’re going to struggle to get un-lost. My personal recommendation? Get a decent GPS device with world maps pre-loaded at a good scale, and always have paper maps as a back up, because none of these maps will help you while you’re crossing the Carpathian Alps or the Atlas Mountains, or kayaking the River Vltva. Being on a serious budget myself, I will probably not take my own advice any time soon, and am going with the best scale available for both Morocco and Romania when I overland there.

Do you know of any good sheet maps for other countries that I could add to this article? Let me know in the comments! I’ll reply/approve (if needed) when I get back from the Highlands of Scotland on Friday/Saturday.