Last night I saw the Northern Irish band Therapy? (the cryptic question mark is part of the name) supported by The Membranes, in Leeds. My Dearest and I managed to get right to the front at one side where there were a couple of seats because everyone else assumed someone was sitting there already (thanks for the tip, Stanley Milgram). Naturally we didn’t sit down.

This meant we were standing right next to the speakers, and they were deliciously LOUD. I should have paid attention to my ears at the point where I was getting ear pain, or the point when I was getting dizzy. But I didn’t. So now it’s the next morning, I have a loud whistling noise in the ear that was closest to the speaker, a quieter whistling noise in the other ear, I can’t hear a lot with my right ear, but I do have some PHENOMENAL PHOTOS to share with you. If you’re a Therapy? or The Membranes fan, you’re in for a treat (and if you’re in one of these bands and would like any of the full size pictures – in higher definition – for promo purposes etc, drop me an email at invokedelight@gmail.com and I’ll work out a way to get them to you).  I’m going to split them into two posts, one for each band, and this first post is for the Therapy? pictures because that’s who we went to see.  I’ll link The Membranes when I add their pictures tomorrow.

Yesterday’s Therapy? concert was the first time I’d used my multi-shot function on my camera and I was quite pleased with the results.  Today I’ve spent a lot of time going through the 625 pictures and choosing the best ones then resizing them because I can’t remotely afford £89 a year for the unlimited storage option on WordPress.

We were actually originally going to see Therapy? back in 2014, when we went to Sonisphere two weeks after our wedding, but because we were both working on the Friday and the Monday, and it was the middle of exam season, we could only get down to Knebworth for the Saturday, and I believe they were playing on the Sunday alongside Metallica.  So when I came up with the Bands Bucket List, they were one of the first bands I added to it, not because they were in any danger of kicking the bucket any time soon (hell, they’ve got at least another 25 years before it’d become urgent to see them), but rather because we both really wanted to see them and felt we’d missed out by having to work before and after Sonisphere.  As teachers, you can’t really book a long weekend off.  Ever.  So anything you want to do outside the holidays is tough shit (and anything you want to do *inside* the holidays has to be so squeaky clean because there’s kids everywhere).  Work seems to get in the way of music (I was in before and in the next day after Lynyrd Skynyrd, and Motley Crue and Megadeth, both of which I haven’t written about yet), but I do want to get back to work again – especially since we’re broke and no immediate family members have died for 3 months straight.
For a Thursday night gig in Leeds, the venue was still pretty packed and I wasn’t sure how everyone had fitted.

It started out like this, the odd perspective of the venue made for some interesting shots.

If you’ve never heard of Therapy?, they’re classed on Wikipedia as a “alternative metal” band.  I would say they’re a bit more DIY (as in; punk-like, not as in; goes on stage and shows off plastering skills) than your average metal band though.  They generally play big crowds so this concert was nothing like I expected.  They were playing through their Infernal Love album, which included Epilepsy, Stories, A Moment of Clarity, Jude the Obscene, Bowels of Love, Misery, Bad Mother, Me vs You, Loose, Diane, and Thirty Seconds.  Had we gone to Sonisphere, we would have heard these tracks there, as they played the whole Infernal Love album then, too.  I think we got a better view at Leeds though.

The current line-up includes Andy Cairns pounding the guitar and singing the lead vocals, Michael McKeegan wielding the bass guitar and contributing extra vocals, and Neil Cooper smashing the drums.  To be fair, they haven’t got much of a history of line up changes.  The long and short of it is that they struggled to find a drummer hardcore enough to hack the tours, but not necessarily with the drama that you’d think that implied.  Their original drummer quit during the first Infernal Love tour in ’95, and since then they got a replacement who quit in 2001 and was replaced in 2002 by Neil Cooper who’s been with them ever since.  I’ve said it before about replacement members from when I went to Dublin to see The Who, but when a replacement member has been with the band for longer than the original member, why do they still get called a “replacement” instead of just “the drummer” or “the flugel hornist” it’s like it implies they’re second rate and I’ve seen time and again that this isn’t true while I’ve been to performances for my bands bucket list.  Consider Dave Gilmour as a perfect example (although I’ve not seen him). Regardless of your stance on this, it’s undeniable that Cooper is a phenomenal drummer who’s more than capable of punctuating the bold phrases of Cairns’ guitar and McKeegan’s whitewater rapids of bass. 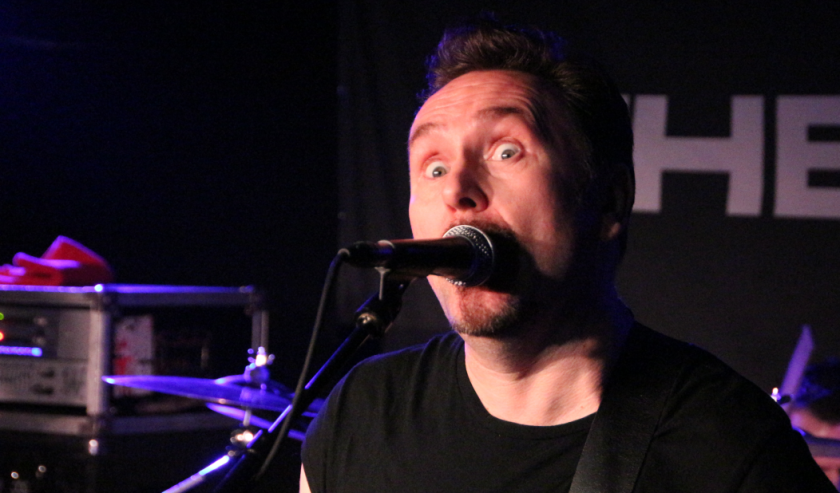 They played great and I was over the moon to finally use my DSLR to take photos at a concert and the pictures came out quite well (but I can see room for improvement) and my Dearest got high fived by Andy Cairns and at some point my ear became very painful and I haven’t been able to hear properly all day.  I went to about 15 concerts last year and this has never happened before (said the bishop to the actress) so maybe I’ll have to get a hearing aid.  I’d totally go for one of those long trumpets.

They could probably have just played Infernal Love and two or three hits from Troublegum and gone home (which is what NOFX did when I saw them in Birmingham) but that wasn’t Therapy?’s style.  In addition to the Infernal Love tracklisting, Therapy? also played Teethgrinder, Screamager, Knives and Nowhere, amongst others. 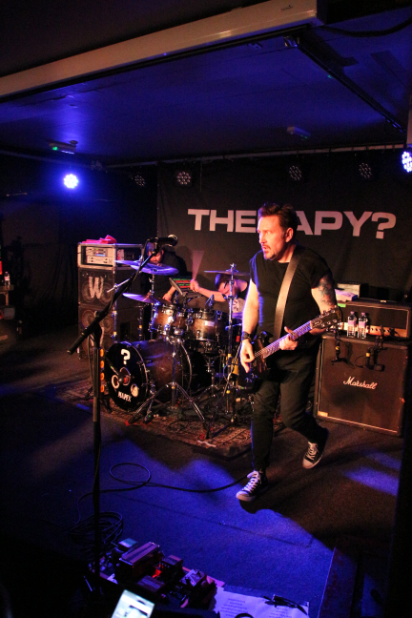 All in all, if you want an excellent night of entertainment you should go see the band.  In fact, if you want music for a road trip, check out their back catalogue.  I can’t think of a bad album they’ve ever done, and at no point in the proceedings last night did I feel like I was adrift in a bog of “wtf are they playing?” unlike when I went to see The Who and ended up leaving.  Or Megadeth, which I also ended up leaving early (which I haven’t reported on yet because I’m still trying to work out whether I can be bothered) .  If I don’t recognize a tune, I tend to not even care as long as it’s good.  If it’s not that good, I’ll give them two more songs to sort it out, if it’s still crap I tend to leave.

At no point during Therapy? did I consider leaving.  Which puts them as better than The Who and Megadeth for a live act in the past 9 months.  And tickets are a fraction of the cost, and we didn’t get oppressed by door staff either, which was great.  So go and see them already!

The supporting band The Membranes were also pretty good, I quite liked them (my stepdad recommended them when we saw NOFX actually, we had a flyer for Blackpool Punk Festival and he was telling me all the ones he liked, so The Membranes’ve got the Someone-Who-Was-Actually-Doing-Punk-Before-Sid*-Died Seal Of Approval). *Vicious, not Barrett.  Barrett is not punk.  But then, The Membranes are one of the original punk bands so this gig was like that time we saw Alice Cooper supporting Motley Crue. Towards the end of the performance, the audience really sort of lost their shit so some of them climbed onstage to try and find their shit again.  Then stagediving and crowdsurfing happened (which is one of my favourite parts of any good concert – whenever I’m at a venue and see a “no crowdsurfing” sign part of me dies inside (despite having no intention of crowdsurfing). The two people above the audience have been pushed off the stage by the bouncer, who as you can see turned up after the stage got mobbed by crowd.  The band were thoroughly professional and continued playing.  And that was the end of the show.

It was so nice to see such a well-known band in such an intimate setting, I never expected this event to be this good when I bought tickets.  I also liked how close we got to the band and I left utterly deaf, but happy.  Maybe the deafness will subside with time.  We drove home and despite my lack of hearing, it was apparently in all the wrong places so I still ended up sleeping in earplugs.

Click here for the rest of my music posts.