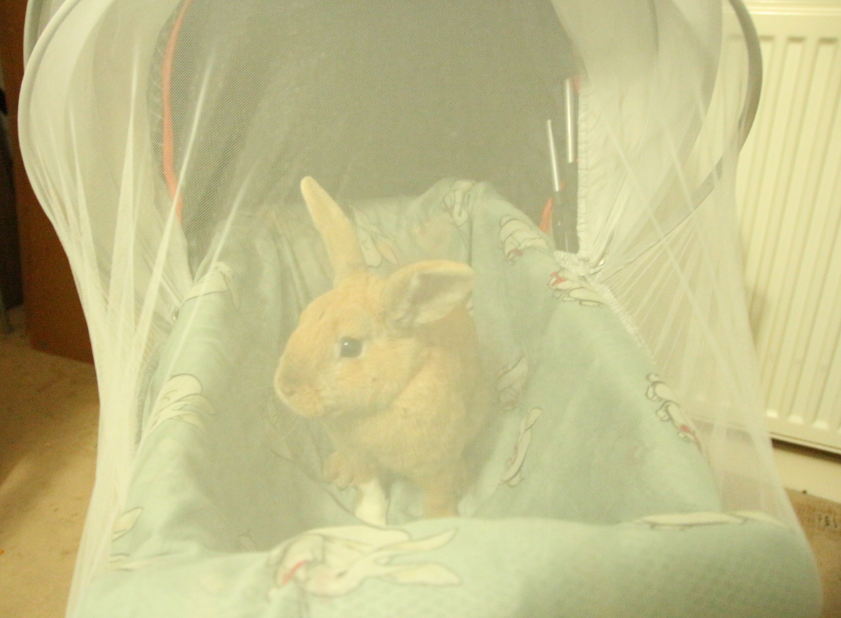 Have you ever wondered how to make a rabbit stroller for your houserabbits, so you can take them places?  I wanted a rabbit stroller because my bunnies sometimes need to travel with me, such as when I took them to the vets today.  I originally wanted this rabbit stroller so I could include my rabbits in our wedding, but sadly the registry offices in the UK don’t allow pets or animals except guide dogs, and we didn’t want the rabbits to wait outside on the hottest day of 2014, so this project languished in obscurity.

My rabbit stroller is finally a successful, completed project!  After procrastinating for 2 years, I finally got it made last night.  It took about half an hour last night, plus about an hour or two (two years ago).  I couldn’t afford a fancy stroller conversion by a professional rabbit stroller company, and a dog stroller was way out of my price range too, so I made do with the cheapest pushchair money couldn’t buy: 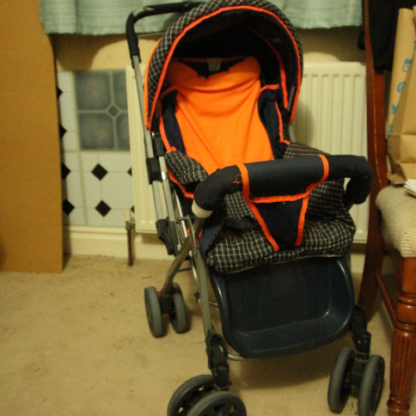 When I bought the stroller (a pushchair), this was what it looked like.  Note the cracked handle (right) and the open front for baby’s feet to go through (or, for my rabbits to escape through)!  The pushchair was also dirty and very difficult to open and close, but it was an unbelievable bargain at £2.80 from a private seller on ebay.  There was no postage to pay as I collected it myself.  Why did I buy this shitty cheap stroller for my VIP bunnies?  Because at the end of the day, the fabric’s not important, I can fix that, but I wanted a good solid base, intact and working wheels, and more important than anything else, the backrest on the pushchair seat had to adjust to flat, to turn it into a pram, because I wanted more floorspace for the buns to lie down in.  This one had that function but still folds down for storage.

I bought a net cot cover (one of these) for about £2 from Amazon Warehouse Deals which, if you’ve never heard of it, is where you can buy loads of Amazon.com products at amazing discounts for reasons such as “the box is damaged” (which, if you shop on Amazon, you know happens all the time on full priced products anyway).  The strong mesh didn’t look like it would protect from mosquitoes as the holes in the mesh were too large, but it was perfect for keeping rabbits in their stroller while making the whole thing breathable (I didn’t want hot, cross bunnies).  I cut and sewed the mesh cover to the bottom of the fabric pad like so:

This then went over the baby handrest like this, to stop rabbits escaping through the leg holes:

Optionally, when it’s raining, it’s possible to also lift the foot rest up to cover the same spot with more solid plastic, but it does still need that mesh net there to stop the foot rest just falling down all the time:

I don’t know what this is called but I bought it at the Mothercare outlet store on sale for £5.  The brand of this rain hood thingy is Mamas and Papas.  It’s like a rain hood with a mesh net, the whole thing attaches over the top of a stroller to keep bugs away from babies (or something, I really don’t know but all strollers seem to have things like this).  This one gets narrower towards one end for some reason, but overall it was perfect to attach to our stroller to stop the bunnies from just jumping out of their snuggly space:

This hood thingy had popper loops that made it easy to attach to our stroller, even though our stroller was some obscure brand, not Mamas and Papas (as a sidenote, I highly recommend Mothercare for rabbit toys, they make indestructible toys for newborns that are often also great for bunnies).

The existing (non-waterproof) canopy hood thingy on the stroller was non-removable and part of the structure of the stroller but the new one from Mamas + Papas was really great because it was wider than the original, and fitted perfectly over the top, but the metal frame of it was lightweight and flexible so it also squishes through the stroller’s handle so I can change the direction the rabbits are facing (the handle flips so you can either see your rabbits, or they can see where they’re going; I recommend one where you can see your rabbits if you’re getting a stroller with a non-movable handle because the rabbits will try to escape).

The outside of the stroller had now been rabbit proofed, but the inside still looked utterly miserable.  I hated it and the fabric was worn and discolored in places, so I found this cute rabbit scarf someone had bought me for a present at some point in the past, and I lined the stroller with it. See?  Way cuter and it has a rabbit print on it.  Long term, I think I’m going to make a new padding for the inside of the stroller so it’s machine washable because bunnies are generally very tidy and clean but sometimes they gotta pee and I like to wash their fabric cushions and other items ASAP when they get soiled.

I also tied the front of the fabric to avoid any dangling ends that could get caught in the wheels:

To continue the improvements, I used two wide hair ribbons I bought about 5 years ago from Wal-Mart (ASDA) and wrapped them around the handle, after tying them to each other to make one long ribbon.  This looks much nicer than the cracked broken handle, and feels a bit more comfortable to hold, but long term I want some foam padding between me and the cracked handle and of course this handle isn’t practical in a rain storm: 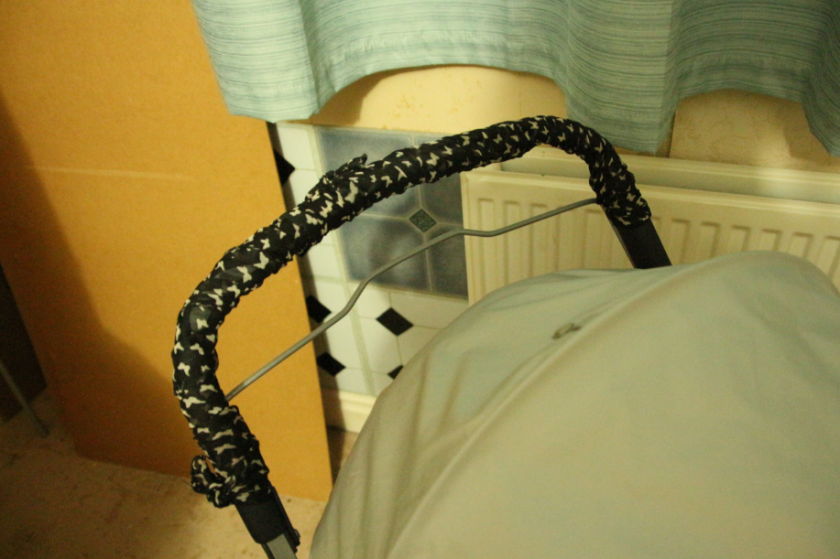 I hooked my umbrella over the handle because if it rains, that mesh netting’s not going to keep my bunnies dry so I’ll need a backup!  This is the finished, fixed, converted rabbit stroller, it fits two bunnies in the main area and the netting just unhooks from the front to get the buns in and out:

Another view of the finished bunny stroller:

And, of course, here’s some pictures of Timmy in his new stroller:

Today I took the rabbits out in their stroller, since I no longer have a car and they had a vet appointment.  The vets is just over a mile each way.  I didn’t like how low the stroller’s handle was, and it didn’t have any way of raising it.  I’m only 5’6″, I’m above average but I’m not a giant, and it seems a bit sexist that they’ve designed this pushchair for really, really short people. I’d be aware of that if you’re buying a stroller for your buns.  Aside from that it was ok although I want more padding between the rabbits and all the bumps of the pavement.  The biggest issue is that they can’t be in it for more than about half an hour because there’s no way of giving them water.  I need one of those travel pet bowls for dogs in cars, because my rabbits don’t drink from bottles, and even if they did, there’s nowhere in this stroller to attach one.  That’s going to be the next addition to this bunny stroller.

The rabbits liked being able to see out, and I think they didn’t mind being in their stroller once they got over the initial confusion about what was going on.  The vet thought it was adorable.  After going to the vets, I needed some feminine hygiene supplies so I walked around the supermarket with my rabbits in their stroller.  The woman at the till gave me a very strange look but no-one else really noticed that there were bunnies in the stroller.  I’ve used the stroller once before, taking Fifer to a supermarket the day after Katie died (he needed companionship and so did I), but he could easily escape because the sides were open (he chose not to, because he’s a very well behaved rabbit), which I wasn’t happy about.  Now it’s 100% rabbit proof and safe to use outdoors too!

Is It Legal?
Regarding the law, unless you’re going somewhere such as a government building (eg. for a wedding), anywhere else there is no specific law in the UK against taking your bunnies as long as they are safe and in an enclosed space. As long as the bunnies are safe and can’t escape, its perfectly legal to take them to most public places (if slightly unusual), but I would suggest people consider whether the environment might stress the rabbits too much before just taking them out everywhere. Public transport (bus drivers etc) may have issues if you get on a busy bus and have to take the rabbits out of the stroller to fold it away and put in the luggage hold, because at that point there’s a loose rabbit on their bus, so I would think about that aspect as well.

5 thoughts on “I made a rabbit stroller for under $15”