This is a first impressions and review of the Manuka Doctor Replenishing Facial Oil.
Basically, it’s an oil blend that you rub on your face and it’s supposed to improve the condition of your skin.

I bought it because my skin suddenly took a turn for the worse about 2 weeks ago and no matter what I do, it just looks dull and unhealthy. I thought I’d try the Manuka Doctor Replenishing Facial Oil to see if it could help my skin perk up a bit. Here’s what it looks like in the packaging: 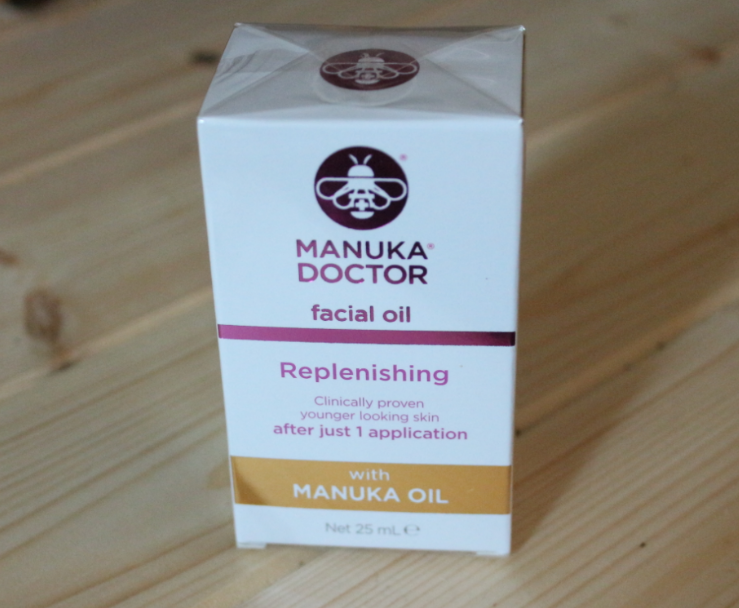 Manuka Doctor are famous for their bee venom products, their logo is a bee with a first aid symbol on its body. Because it’s Dr. Bee, which is freakin’ adorable. Anyway, the Replenishing Facial Oil has no bee venom in, but it does contain oil from the Manuka tree (which of course is where Manuka honey comes from, and Manuka honey is apparently really good for you).

As you can see, it’s packed full of goodness.

The scent was sort of flowery but not in-your-face-floral; I quite liked it. The bottle had a nice dropper to make application easy, and it was nice to see how much I was using.

I have normal skin that’s very slightly sensitive, sometimes oily and sometimes dry depending on a range of factors.

On my skin, it spread easily and absorbed after about 10 minutes, leaving my face feeling nice even though I couldn’t see any magical improvements to my skin. Maybe something’s happening at a microscopic level, because after a couple of hours I had to concede that my forehead was looking less washed-out and so were my cheeks. I’m going to try it for a few weeks to see what the longer term benefits are, but overall I’m fairly happy that this oil will replace the macadamia face oil I was previously using (which ran out this week), and if it does a better job than the macadamia oil, I’ll let you all know.

Costs: £16.92 from Amazon UK. That’s how much I paid for it and that’s where I got it from. It’s not available on American Amazon.com but you can get it at Skinstore.com.

Have you tried any Manuka Doctor products? I want to try the night cream with bee venom but I don’t know if I’m brave enough!

This is a definite cooking fail!

Today I want to talk about spray-on lotion moisturizers, because moisturizing lotion is important.

I bought three recently, because I wanted to know whether Vaseline Spray and Go was really the best one out there, since a few others have recently been released.

Up for test are:

Balance Active Formula Nourishing Spray Body Lotion (that links to UK Amazon – not available in the US) – I bought for £1.00 in a discount store.

Hydrate and Go Body Moisturiser Spray – I bought for 49p from a discount store, apparently not available on Amazon.

And they’re all being compared to my current favorite:
Vaseline Spray and Go Cocoa Radiant $6.20

First let me start by saying this whole experiment has proved how much I love the Vaseline Spray and Go in Cocoa Radiant.

The only issue I had, which reviewers have commented on, was that the spray top didn’t work very well so it was very difficult to dispense product. Normally with spray lotion, I have a problem doing my right arm – because I have to use the hand that’s covered in lotion (from rubbing it in while I sprayed with the other hand) to spray the bottle. With the Palmers one, it was actually impossible to get the spray nozzle to press down with my lotion hand. It was too stiff and the bottle became too slippery. Aside from that, I liked it though, and if I saw it at £1.99 again, I’d buy it, but I’d never pay $12 for it!

Con’s:
Sprayer didn’t work very well and I felt like I was fighting it a lot.

Balance Active:
The Balance Active one was less pleasant to smell – it smelled like that talcum powder that middle aged women used to use when I was younger, and deodorants with names like “Mum” or “Sanex” when they all smelled the same as each other. The spray also had issues – the actual sprayer seemed to work ok, the main problem was that the lotion separated when it was sprayed, so in the middle there was a white streak, and round the outside was watery colorless stuff. It looked a bit dodgy, if I’m honest, and I wouldn’t want to share photos of that as they’d get mistaken for jizz. Having gotten past that to actually putting the product on my skin, I found that it was moderately moisturizing but a bit too watery to replace normal lotion. It wasn’t sticky, but it didn’t leave my skin feeling as silky as the Palmer’s or my usual Vaseline spray lotions. I did find because the lotion separates when sprayed that it sprayed my carpet and furniture a lot more than my actual legs, so I was spraying it into my hand to rub in, instead of directly on my body, by about day 3. Here’s a before and after on the other leg to the one I did with the Palmer’s (above):

Pro’s:
It was very cheap when I bought it.
It did moisturize my skin a bit.

Con’s:
It left my skin feeling dry again 12 hours later.
I didn’t see anything to substantiate the “anti-ageing” claims on the bottle.
The bottle’s too bulky for gym or travel use.
The lotion separates when it’s sprayed. This makes it difficult to aim.

Hydrate and Go:
The “Hydrate and Go” one looks like a Vaseline Spray and Go dupe. But it isn’t. I would say it was the worst of the four spray lotions I have tried. Like one or two other things that boast a “non-greasy formula,” this Hydrate and Go was sticky, leaving my skin feeling like I might not want to go outside in case wasps got confused and thought I was a can of coke. It was that bad. I actually had to go shower again after using this, then use my Victoria’s Secret (non-spray) Love Spell lotion to get rid of the sticky feeling. I hate stickiness. I wouldn’t buy it again. In fact, from the dust on the lid, you can see that I never used it again after the first use, and I only kept hold of it until now so I could show you a photo for this article. I don’t have any before or after shots for this one because I just wanted it off my skin.

Pro’s:
It didn’t cause me to catch on fire or get AIDS.

Con’s:
Everything else you can think of.

Vaseline Spray and Go:
I like the way it sprays, it’s a bit thinner than a normal moisturizer but it’s good for when I’m in a hurry. It’s a little bit bulky but nowhere near as bad as the Palmer’s or the Balance Active. It smells nice and is non-sticky. I only really looked for another one because it’s quite expensive to buy this in the UK compared to the prices I paid for the other three. However, I now know it’s also better than the other ones.

I will be using the Palmer’s until it’s empty (if I can get all the product out with that dodgy sprayer) because I really like it aside from the sprayer issues, then I’ll buy more of the Vaseline Spray and Go. It’s the original, and it’s the best of all the ones I tried because it just works.

Have you tried any of these? What did you think of them?

Has anyone tried this dish? I really want to make it, but I don’t know where to get catfish in the UK! It sounds very delicious.

And I could listen to this lady’s voice all day:

For those of you who don’t actually know, the Neverending Story was a movie from the 80s with a super-catchy theme tune. It was also a book by Michael Ende, a German dude. It was fashionable at the time for authors to sell movie rights to Hollywood then, upon seeing the film of their work, complaining that it destroyed their work and that they wanted nothing more to do with it (see also: Alan Moore).

Michael Ende sorta did that. So you don’t know who he is any more.

It’s actually a good read, in the same league as The Princess Bride. And The Neverending Story is also a great film. I liked the sequels when I was little, but they didn’t have the same timelessness as the first one.

But my favorite part is the theme tune by Limahl. The lyrics are just… just perfect.