So, I spent all week stressing about not having enough money, then I decided to make myself feel better… by spending money. So now I’m the owner of a bottle of Chanel Longwear Nail Colour in shade 167 Ballerina. I wanted some China Glaze but I couldn’t find any in TK Maxx so I went to the Chanel counter at John Lewis and bought this instead. I have never had high-end nail polish before, but I bought it because I read this article where they said it’s one of the best (along with China Glaze, Essie and Opi) for not chipping. I’ve had the same nail varnish for about 2 years as I liked the color, but it chipped SO BAD that it looked like it had been on a week after a day, which is why I thought I’d go for the best this time.

This is not only my first high-end nail varnish, it’s also my first Chanel product, and the very first time I’d ever been to the Chanel counter.

The Chanel counter assistant swatched Ballerina for me on a piece of clear plastic sticky tape on the back of my hand, alongside Organdi, because I couldn’t decide between the two colors from looking at the bottles. Organdi is a neutral nude in a generally flattering shade, whereas Ballerina looked almost white when swatched. I bought it and they wrapped it in a piece of paper scented with Chanel No. 5 then put it in a bag that was fastened with a piece of ribbon that says Chanel along it. Two days later the perfume is still making me smile (I love Chanel No. 5; if there was a room spray I’d totally get it, but the perfume never mixes well with my skin, and it produces a weird scent, so I can’t wear it despite how much I love the smell in general).

As soon as I got home I put it on my fingers and it took AGES to dry because I kept moving and smudging it. Also, I’d been doing the layers too thinly (because my old nail varnish was a one-and-done kinda nail varnish). Ballerina is really sheer and needs 2-3 thick layers, so I ended up with 5 thin layers on one hand and 4 medium ones on the other, and I still managed to smudge it again on one finger!! It was only a little smudge so I decided to do nothing about it.

It came out a really pale pink and I love the color. 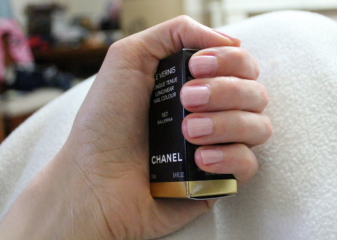 Two days after I put it on (and bear in mind I’ve done SO much housework and cleaning and reorganizing which is usually certain death for nail varnish) it’s still got no chips at all and it’s still super shiny!

Conclusion: This is the best nail varnish I ever got! Five out of five for longevity! Usually when things say “longwear” it’s code for “sub-standard and never comes off” but in this case, it really, truly does what it’s supposed to! I’m thinking about getting another one when I next get paid, in a darker color. Obviously I can’t say that it’s the best high end nail varnish because it’s the only one I’ve tried, but I still completely love it and think it was worth £20 just for the fact I feel more confident wearing nail varnish now that I can touch things without chipping it! I’m definitely going to get some China Glaze as soon as I can find it so I can do a comparison review.