Okay so all the news coverage of the Plandemic video in mainstream outlets was outraged. They have described Plandemic as a hoax peddled by a bogus, discredited scientist. It’s a video, if you don’t already know, of a scientist who talks about coronavirus and some of the so-far unanswered questions about the virus.

Assuming the video is exactly as the media have described, you would be right in dismissing the whole thing as a crazy conspiracy theory that would only appeal to fans of the X-files.

This is the same line I often see being thrown around about anti-vaxxers, who are mainly just concerned parents, or people who query evolution by pointing out there’s a lot left to learn about it. Accepting scientific dogma uncritically is a terrible idea.

I have a master’s degree in science and am qualified to teach high school chemistry, and I feel the need to comment. But unlike those overpaid journalists on mainstream sites, I’ve taken the time to watch Plandemic first. It’s available here, and you should watch it too. Don’t rely on third-hand reporting. See for yourself what is being loudly and vocally discredited by people with less understanding of science than the plant pot who came up with the movie line “the neutrinos are mutating”.

Make up your own mind.

I might have been more inclined to lazily ignore the whole thing as “hype” if I had been able to find it straight away on Google. Or any search results in the first 6 pages of searching for “Plandemic film” that weren’t just more and more articles saying that it was a hoax.

Eventually, I did find it. By which point I’d put so much effort into doing so, that I was darn well going to watch the full 25 minutes. I might have only watched a minute or two if it was readily available.

I put the video on expecting to have 25 minutes of laughter at the bizarre. I love a good conspiracy theory because, at their worst, they are hilarious.

But the film started off with some important information. And presented evidence. I took to Google Scholar to double check the references that were given in the video. They are there, published in reputable, peer-reviewed journals, but when you search for the exact titles, they don’t come up in the search results unless you put quotations around them.

Dr. Anthony Fauci’s patents are searchable in the US patent database. If you read fully the patent details, you can even see he’s had a patent on a HIV treatment since 1996.

I suspect, by the same token, that this article will get buried at the bottom of dozens more of those “Plandemic is a hoax, somehow we know this without watching it” articles.

Here is the article written by the Department of Defense that is referred to in the Plandemic video.

The interesting part of the above article is this (direct quote): “Vaccine derived virus interference was significantly associated with coronavirus and human metapneumovirus.”

That is a published article from America’s Department of Defense.

The American Department of Defense was studying coronavirus three years ago and found out the flu vaccine made people more susceptible to coronaviruses.

Given that they knew this back then, why was the flu shot one of the first “treatments” recommended to prevent coronavirus a few months ago? Why did no one think, “gee, I’d better tell them what a bad idea that is” and put a stop to it?

Or were they ignored?

Like the Plandemic video is being lambasted and ignored?

I’m not going to tell you what to think of this video. I’m just putting it out there because how can you critique or review accurately something you have never actually seen? I thought we were supposed to have enquiring minds. If something is bad science, let it stand up. Critique it. Review it. Don’t shoot it in the back and bury it under the patio. People will just start looking harder for it. 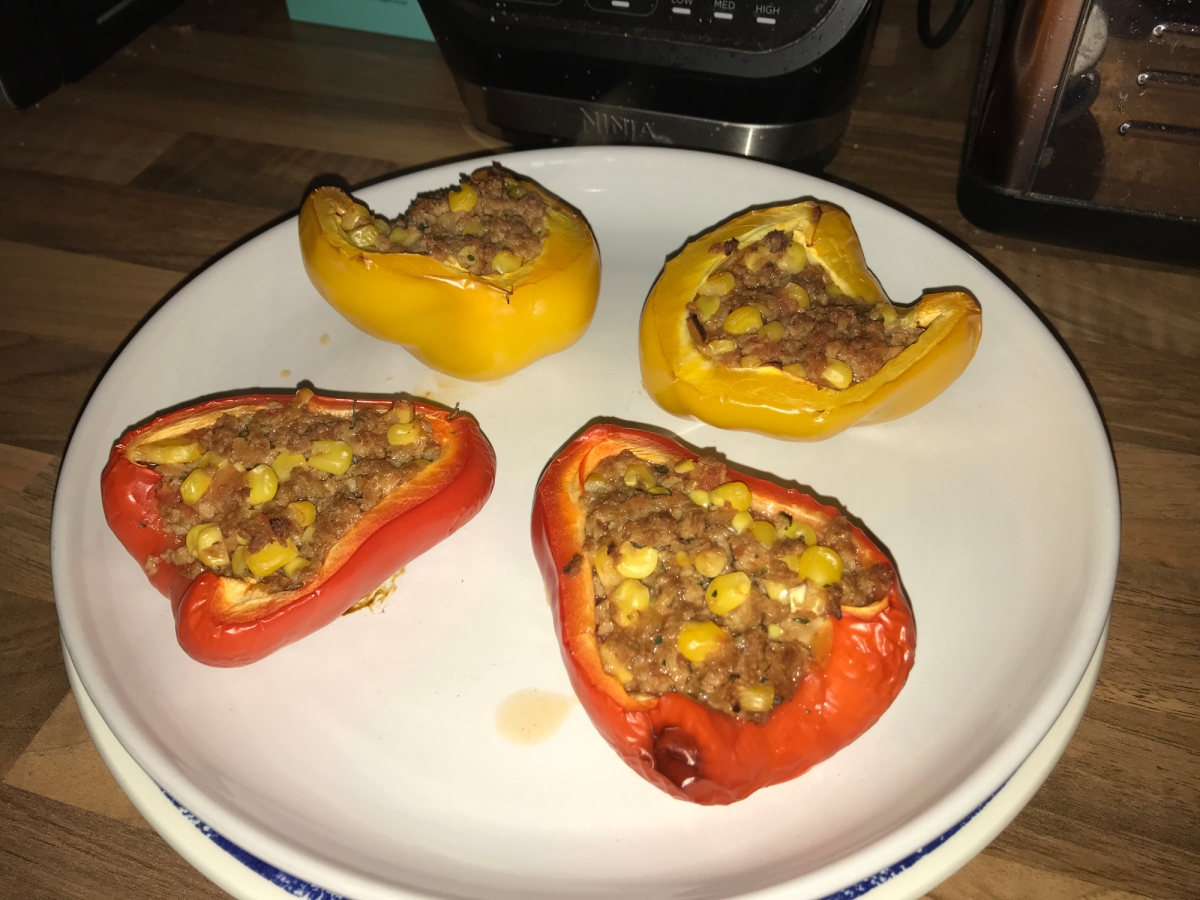 I love stuffed peppers! They’re such an easy way to get more vegetables into your diet and this recipe is super-healthy. This was an experiment in changing things up, because I usually make stuffed peppers with rice, but today I wanted something different, so I filled my peppers with a taco-style filling of soy mince (TVP), sweetcorn and salsa, and topped with my vegan no-blend guacamole but you could also add grated vegan cheese if that’s your thing (or if you have any… I don’t, because my local Sainsbury’s has mysteriously stopped selling all vegan cheese since the lockdown began). This recipe is also perfect for when you are craving tacos but don’t have any taco shells. 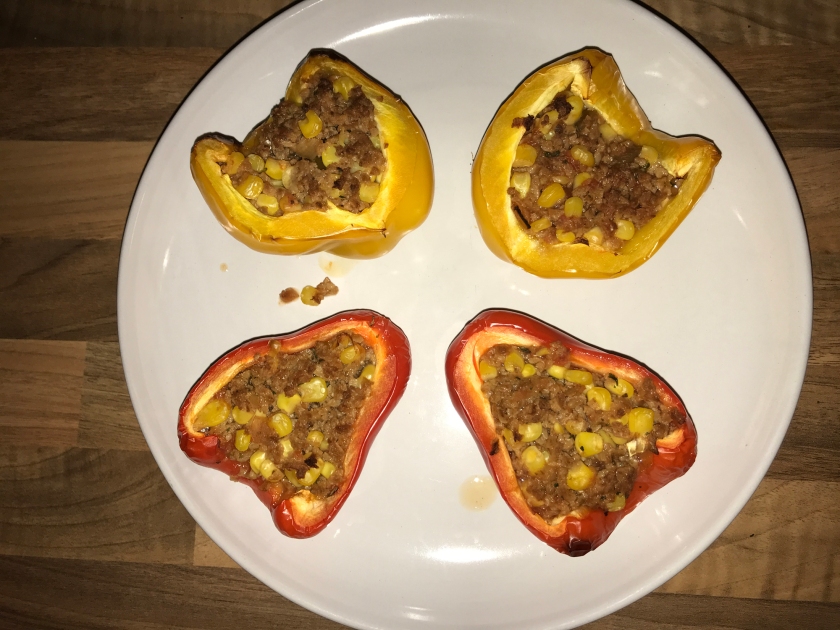 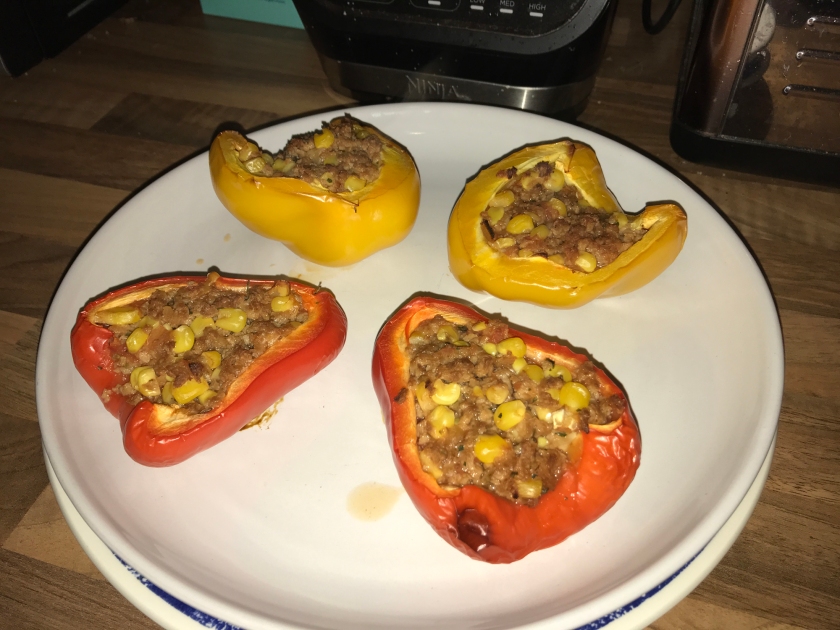 And finally, top with my easy no-blend avocado: 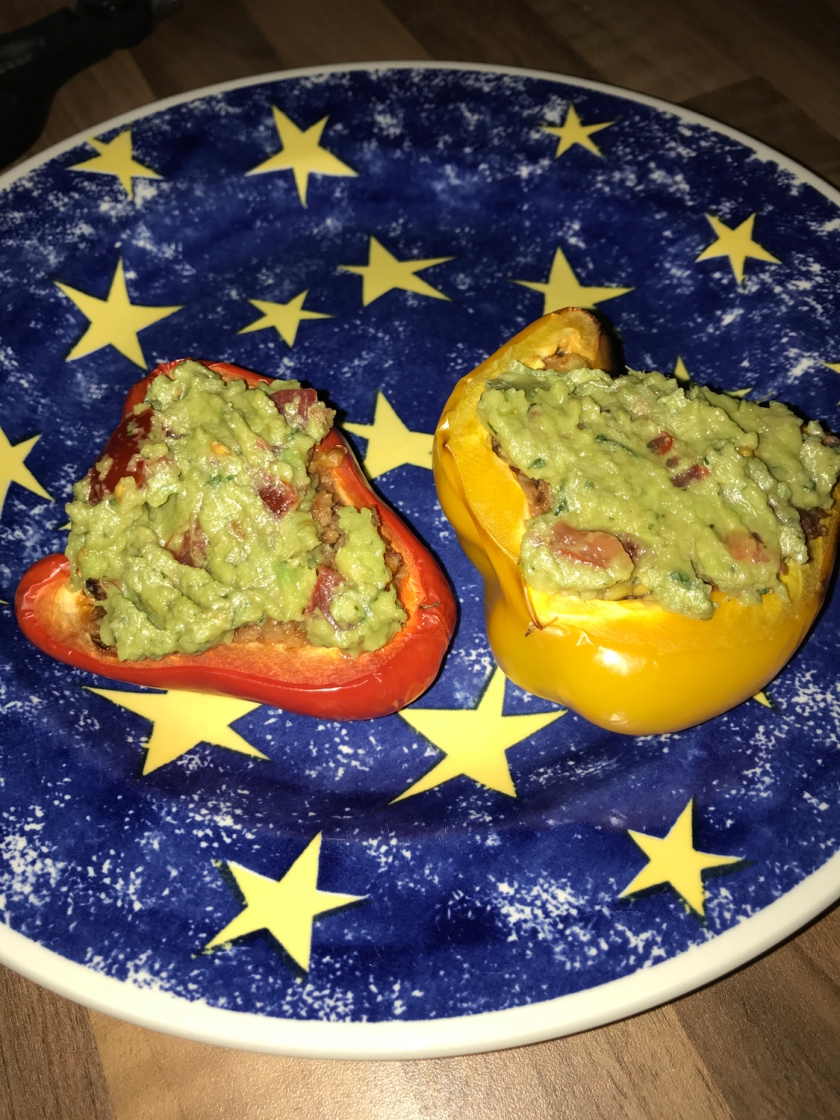 What’s your favourite thing to put in stuffed peppers? Let me know in the comments! 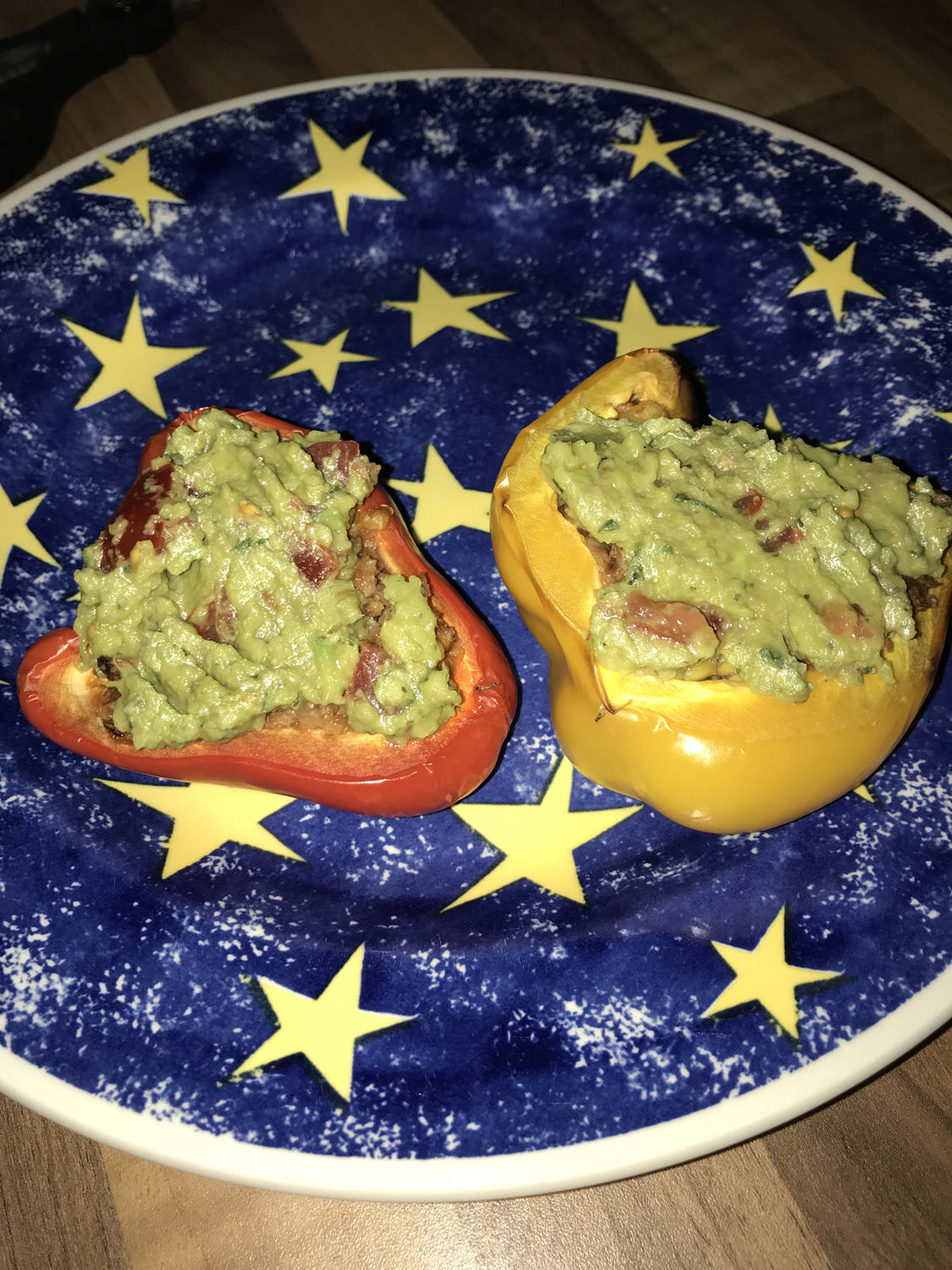 Serves 2 as a dip or 1 as a big dip. Scale for the number of people you’re feeding.

I looked through some fancy recipes for guacamole but they all needed ingredients I didn’t have, namely, fresh avocado, fresh cilantro and lime juice. So I’ve come up with this recipe to work with the ingredients I actually have, because I’m not the sort of person to keep limes in my house unless I want to specifically make something unusual with them.

I wanted guacamole to top off my vegan meaty bell pepper tacos, because I can’t get vegan cheese right now and tacos without cheese OR guacamole is just crazy talk. Of course, I only thought about guacamole after the bell pepper tacos were already in the oven, so this recipe is quick and easy.

The bell peppers for the taco recipe take 15 minutes and this guacamole recipe took the time after the peppers were in the oven, minus the time it’s taken to write this article. I can’t put the blender on right now, because the baby is asleep and my Ninja sounds like a Harrier Jet when it’s running, plus I really can’t be bothered to clean the thing, so this is a no-blend recipe, too. 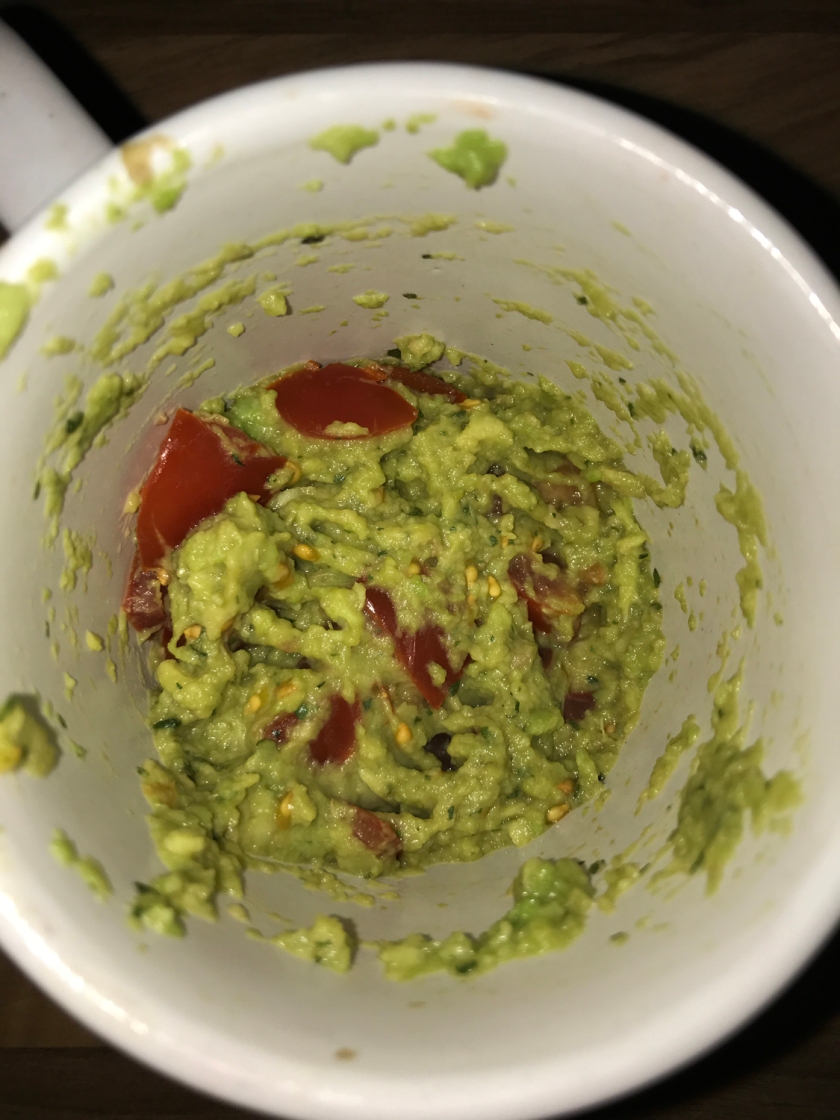 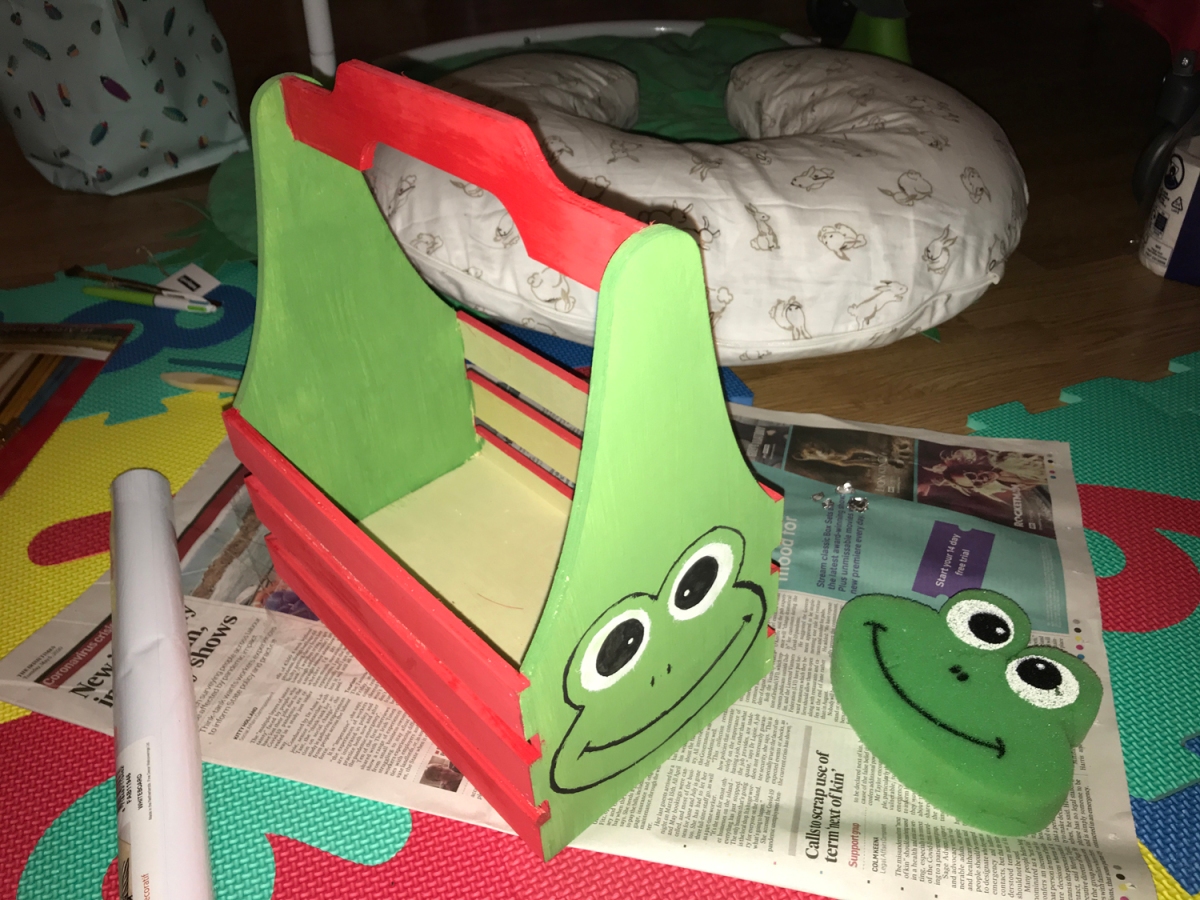 So I really wanted one of those gorgeous Ikea spice racks that Americans are transforming into book holders for children, but sadly, UK Ikea don’t sell the same spice racks. The ones in the US go for $6.99 and the nearest UK equivalent is £18.

That’s a pretty huge difference, when you consider that a British £1 is worth more than $1 USD. Like, they get the same thing for about £5 that we would have to pay £18 for.

So I bought this wooden wine carrier from Hobbycraft. It was unfinished and I measured it. It’s the perfect size for the Gruffalo but about half a centimetre too small to fit any of the Charlie and Lola books in (boo). If Hobbycraft ever make these half a centimetre bigger, I’ll get another one and paint that instead. 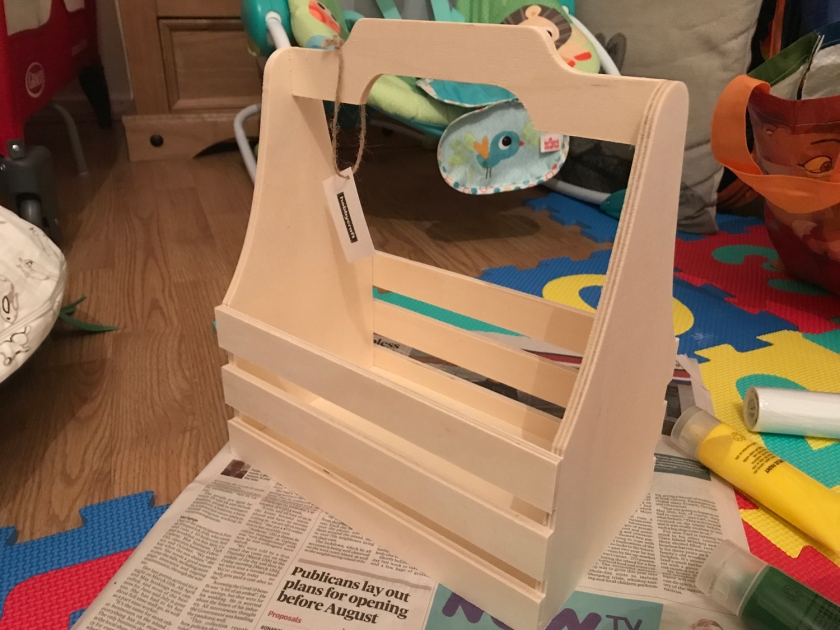 I painted the ends green and the middle red, using cheap acrylic paint from The Works (£2.99 for 6 different tubes of coloured paint) and cheap brushes, also from The Works.

I copied the frog picture from Jellyfish’s favourite bath sponge, a frog we have dubbed Mr. Ribbit. If you’re wondering, the frog sponge is here in a 2 pack.

It took two days to do the whole thing and I feel really proud because I am not very good at painting. 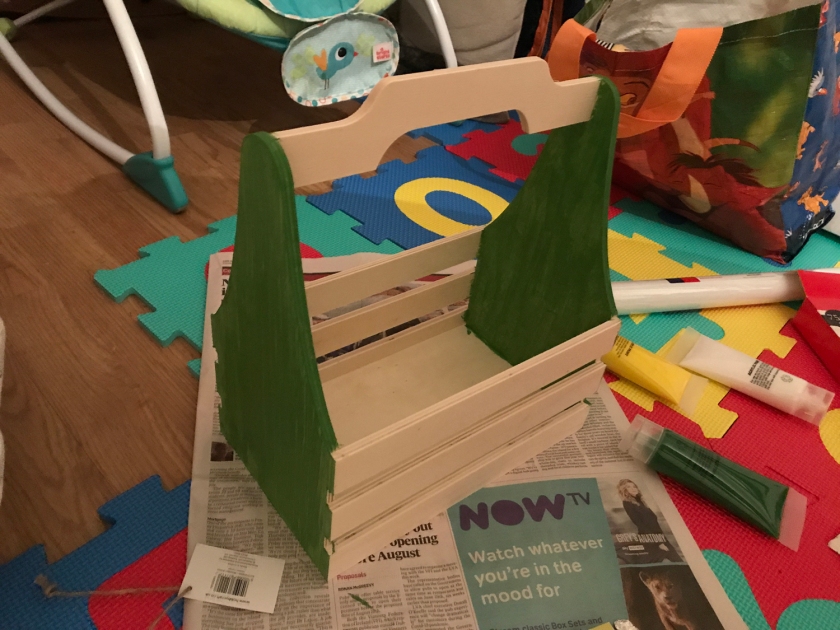 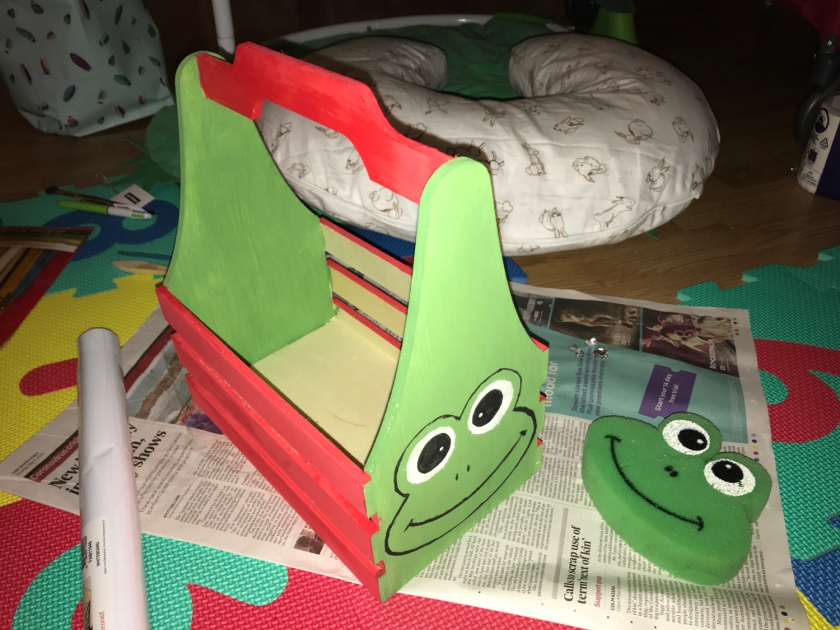 I can see the frog could have been painted better (by someone other than me, with a steadier hand and better drawing ability) but overall I’m happy with how this turned out. The first thing Jellyfish did when he saw it was try to put it in his mouth so he definitely thinks it looks like his frog sponge.

I can’t wait to put books in it!

Have you made anything this week? Let me know in the comments. 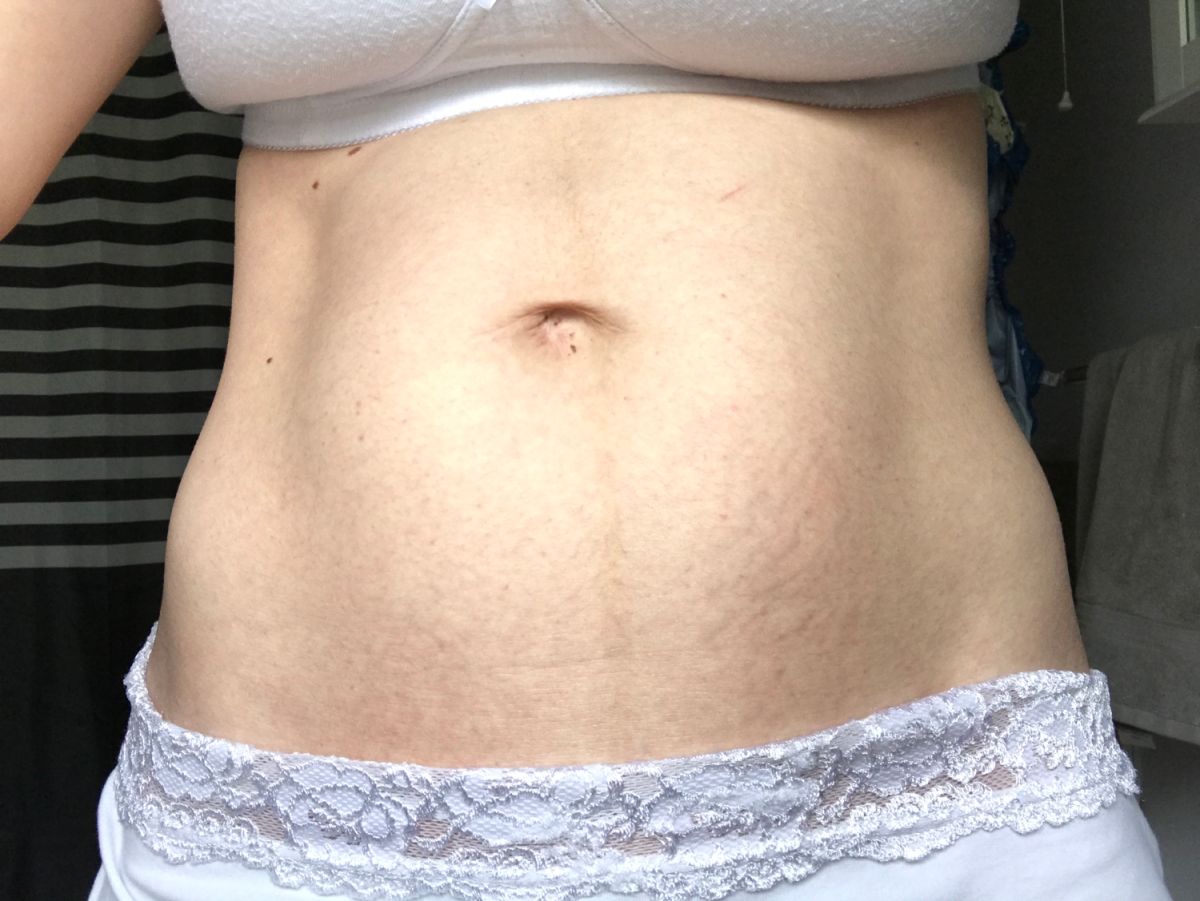 I always thought this was a myth, and that it was impossible to avoid stretch marks or to get rid of stretch marks. My back is actually covered in stretch marks from when I used to be a professional ice skater, and my legs were, too, from all the stretching. But my tummy? No stretch marks. And I managed to diminish the ones on my legs, too! I’ve had those since I was 12! Okay, full disclosure, there’s the tiniest little scattering to the left of my belly button but check out the pics below to compare my belly to the stretch marks on my back, I am still shocked by how well this worked. I am 9 months postpartum.

Here’s how I did it. As they say, prevention is the best cure. It’s important to know that buying products won’t solve the problem by itself, you need to know how to use them, and you need to actually do it daily. When I was pregnant my skin got very sensitive so I had to be very careful what products I used. I all but stopped doing my facial skincare routine and had to completely avoid products containing retinol or hyaluronic acid, which are usually skincare staples for me, so pregnancy was a challenge to completely re-think my skincare routines and make them more natural. Links to products are further down.

The interesting thing about all this is, it actually helped heal stretch marks I’ve had on my legs since I was about 12 from doing excessive amounts of stretching for sport reasons (but the ones on my back are still vivid). I didn’t work on the ones on my back at all with any kind of skincare products (silly me) and they really stand out. I am now 9 months post partum so I don’t think those stretch marks on my legs are coming back, either.

Products I recommend to avoid stretch marks and get rid of them:

Here’s some pictures of me postpartum (I’m standing in front of the shower curtain and my boobs are weird atm because I’m still breastfeeding and one boob is much bigger than the other, so no bras fit properly). As you can see I only got one tiny patch of stretch marks that are very, very faint on the lower right side of my belly button. This first pic shows my C-section scar to prove I’ve actually had a baby. I’ve also included a pic of the stretch marks on my back from years of exercise, to prove I’m not genetically immune to stretch marks or something (my next task is clearly to work on those ones on my back haha): 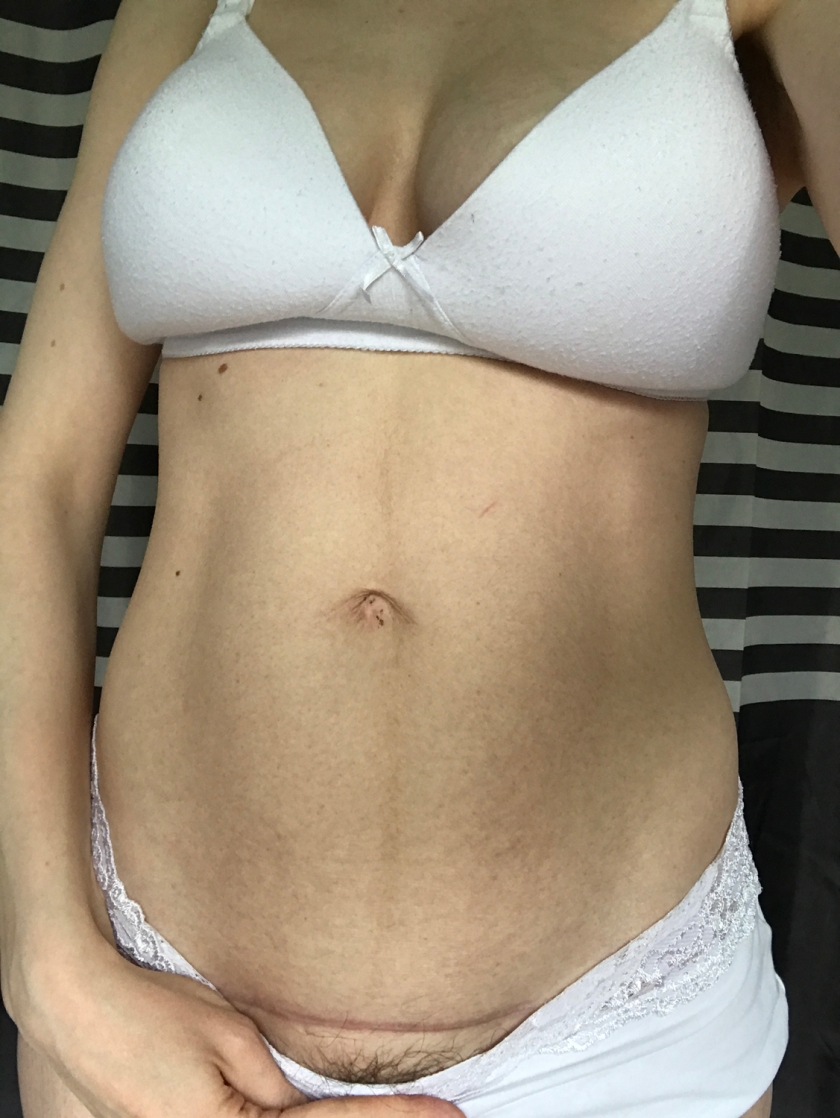 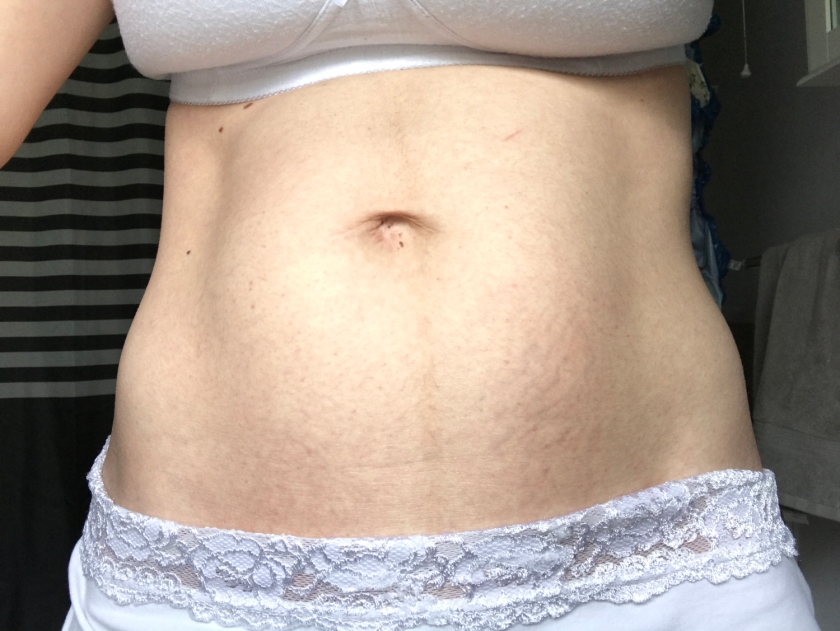 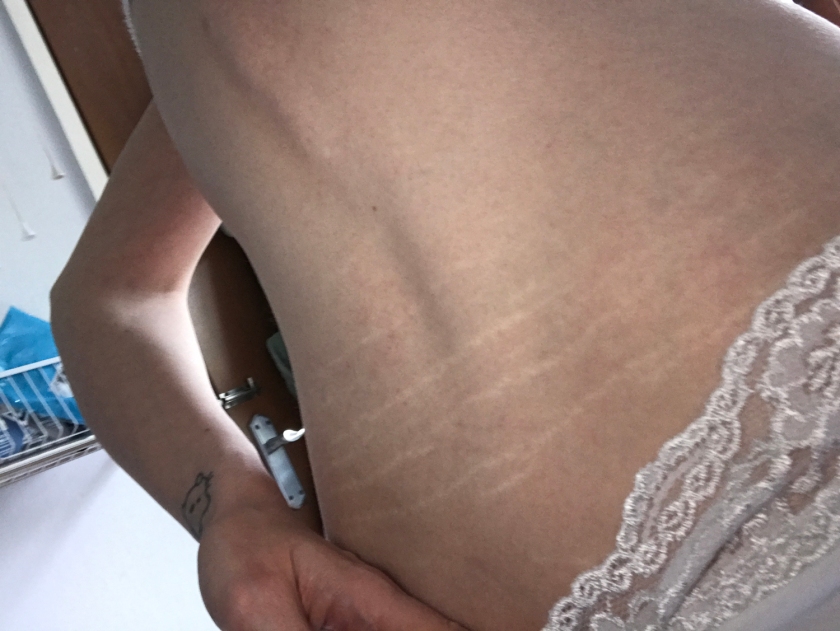 That’s my how-to. Now what I really want to know is how to get rid of that brown line that goes north to south down my belly. I think it’s where the muscles separated ready for giving birth (my entire belly button disappeared and turned dark brown because it stretched so much due to past surgery preventing it from popping out, and it hasn’t completely gone back to normal yet) but they’ve never quite gone back. I’ve been doing so many stomach exercises but maybe it will just take time.

PS I’m not a doctor so legally I have to say, please consult a doctor before taking supplements and if you have any concerns about your health during pregnancy. This article contains affiliate links to Amazon where appropriate, but doesn’t affect the price you pay for anything.