Today I want to talk about the Sana Keana Pore Putty BB Pact SPF40 PA+++ because it arrived this morning from Japan!!  So excited to finally review Japanese cosmetics!

I’ve been totally psyched to try Japanese make up ever since my Korean Clio Water Me Please BB Cream turned up a couple of weeks ago.  I wanted to know how the two products would compare but for the time being, this is my first impressions of the Sana Keana Pore Putty BB Pact.

There appear to be 2 different ones with different SPFs.  I got the shade 01 (light) in SPF40 PA+++ (PA+++ means high protection against ageing UVA rays).

This is what it looked like in its packaging:

This is what it looked like out of the box: 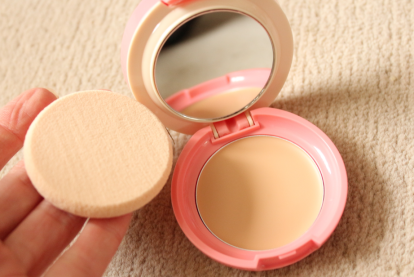 I adored the packaging of the Pore Putty sooo much!  It’s absolutely delightful.  Not as Kawaii as some of the other stuff from Japan but more sophisticated, yet still cutesy.  At first I thought there was no mirror, which was disappointing, but then when I lifted the top compartment, surprise! It turned out the product – and the mirror – were both underneath the area for the sponge.

Application wise, it was probably the easiest thing I’ve ever applied and I only needed a tiny amount of product to cover all of my face.  I would say it’s like a hybrid between a BB cream and a foundation.  I swatched it on my arm before I used it on my face: Next I put the Pore Putty BB Pact cream on one side of my face to compare it to nothing on the other side:

In the photo above, the breakout on that cheek was due to my experiments with setting spray earlier this week.

This was so much better than the Avon Cream to Powder foundation that came in similar packaging and looked virtually identical – this Pore Putty is the real deal and I can see myself using it as a daily wear product!  I like that it evened out my skin tone, and I thought it was a good match for my winter/spring skin tone but a teensy bit pale for my summer skin colour, which was a shame.  I wish I’d got the darker shade now since it’s May (it comes in 01 Fair and 02 Natural and I chose 01 Fair after much consideration).  I’m only an NC20 but I’d have to be a teensy bit paler for the fair coloured Pore Putty to blend seamlessly.  As it is, it has blended nicely, just made me look a bit paler than I’m used to.  I’ll take that though because it goes on so smoothly.  Undertones were nice, I can’t make out if they were pink or yellow but whatever, it made my skin look like it had a lit-from-within sort of glow!  I like that and it’s something I don’t often find with foundations.  I did still put some blusher on when I finished my make up just to try and bring my face colour more in line with the rest of me!!

Overall, I really liked this product, application was easy and the coverage was medium, it didn’t make my pores/lines worse (which most foundations do, even with a primer), in fact, the opposite happened – it actually minimized the two fine lines either side of my mouth and the pores around my nose a lot more than anything else I’ve used.  I didn’t use it with moisturizer or primer (my usual routine) and it came out better than most foundations that I use *with* primer so I reckon it would look flawless if I put it on over primer.

This was the finished look:

I would say this is the best result I’ve had with a foundation for years!  If I was going away to a festival or something, I would feel comfortable just taking this and not taking primer!!!  I never thought I would say that about a product, it’s just so moisturising without being greasy or silicone-y at all!

It’s also one of the few Asian beauty brands actually available in the UK.

(takes you to Amazon because I’m an affiliate).  Delivery took about 25 days because mine was posted from Japan.  Different suppliers will ship from different locations natch.