I’m away until Mon/Tue, this is prescheduled.  What is micellar water?
Are you someone who sees a new word and wonders what it means? I was looking into whey protein substitutes today and learned that the word “micellar” isn’t just a brand name. It’s a biological term, and I’m going to explain it to you in the most straightforward way I can, without dumbing it down. For me, it’s been interesting to put a name to a scientific process that I know well – it happens every time I wash my hands.  There is a glossary under the first picture to help with key terms.

What is a micelle?
It’s a collection of surfactant molecules that are dispersed in a liquid colloid. In an aqueous solution (a liquid made of mostly water), the surfactant usually has a head that is attracted to water (called a hydrophilic head) and a tail that is repelled by water (a hydrophobic tail). Soap forms surfactants, and the tail buries itself in the dirt in your hands, then the head pulls that dirt away by being attracted to the water from the tap.

Because the heads love water and the tails hate it, if you put a collection of surfactants in water, the heads which love water all want to be as close to the water as possible, and the tails want to get away, so if there’s enough of them and its warm enough, they form 3D balls like this one:

This is known as a micelle.

surfactants: These are something you find in soap, shampoo, and household cleaning products such as washing up liquid, laundry detergent and bleach, it’s a type of molecule that cleans things. Imagine it looking a bit like a tadpole, except it’s not a living thing.

dispersed: When molecules split up and move around in a liquid without dissolving, they are said to have dispersed. Football fans disperse after the game ends.

colloid: A colloid is a liquid that is full of particles that haven’t dissolved but have still mixed into the liquid so it doesn’t feel grainy or gritty usually. An example is milk. Another example is any emulsion such as paint.

How do scientists get them to form in micellar water?
It takes two things to make them form, because naturally, the surfactants just float to the edges of the liquid where the tails can be away from the water. To make a micelle, you need (drum roll please, these two factors are what makes most chemical reactions happen)… higher temperature and higher concentration. That’s because of something you should have learned around age 15 in school science – collision theory. You probably know the process even though you might not have been able to put a name to it. Basically, all chemical reactions can only happen if two things collide with each other. If they don’t make that connection, they will go about their separate ways and nothing changes. It’s like how two people can’t make a baby if they’ve never met (assuming they’re not doing it in a lab). So collision theory says there’s a few things that can increase the chance of those collisions taking place, which increases the amount of a product we can make with the ingredients. The three things that affect the rate of a reaction (usually) are temperature, concentration of reactants (ingredients), and pressure. Technically, it all comes down to pressure, but we usually split it out into the causes of the pressure (temperature and concentration) to make it more clear so people can repeat the experiment. Experiments have to be repeatable.
So they heat the water and surfactants, they add loads and loads of surfactants to the water, and they get these micelles, which are basically balls of soap that are effectively stuck in the water, because the water-loving heads are all facing outwards.

What’s so special about micelles? Why is micellar water the Next Big Thing?
Firstly, it’s got the word “water” in the name so it appeals to the all-natural crowd. Secondly, it’s got soap in it. So it’s going to get you clean.

Micelles, as we said above, are only formed in very high concentrations of your surfactant, and because it forms those protective spheres, it’s less harsh on your skin, your hair, etc, than lower concentrations. A good example of this is sodium laureth sulphate. I’ve said before that, as a surfactant (a cleaning thing), it’s pretty damn good. In lower concentrations, it’s known to be quite harsh on the skin and hair – so the less you use at any given time, the more it will dry your skin or hair out. How can this be? How does this possibly make sense? Imagine the surfactants, the tiny molecules of sodium laureth sulphate, as sharp sticks:

When the sticks are on their own, and facing in every direction, they will poke you and hurt you. When they are arranged like this, they can’t hurt you because the sharp bits are all facing each other in a big sphere that protects you: 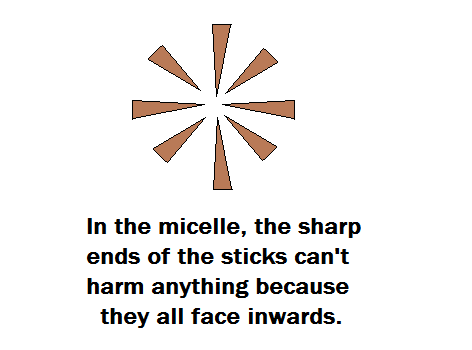 In detergents, soaps, and other surfactants, the pointy end is not a sharp stick, it’s actually a tail (although technically that’s still an analogy). It doesn’t like water, so it buries itself into the dirt in your hands, so that, when the water is washed off, the heads (which love water) swim away and the tails are still holding the bits of dirt. The problem comes when there isn’t enough dirt and that’s when it causes dry skin and hair – when they bury themselves in the natural oils of your skin and hair, the ones you want to keep, and then they swim away with them.

So what use is a micelle in water? If there’s no tails, how does it get the dirt off?
It makes surfaces easier to clean, by lowering the surface tension of water. This makes it easier to get into all the nooks and crannies (when you wipe a cloth over a surface, for example), and is also used for washing clothes. It has loads of uses inside the human body such as to get pharmaceuticals to release in a certain place or at a certain time, and special micelles in your liver (formed from fatty acids) are what absorb key vitamins including vitamin E, vitamin K, vitamin A and vitamin D. What it can’t do, is get grease out, or anything else that won’t just wipe off. So micellar water will work a bit better than plain water, but not as well as real soap, but the micellar water will be less drying to the skin or hair.
So effectively, Micellar Water is very watered down inactive soap. It will get you clean because it has the exact same properties as any surfactant, and it will be gentle because it’s very watered down and all the pointy bits are facing inwards.

Have you tried micellar water? What do you think of it?  Let me know in the comments and I’ll reply when I get back 🙂