My baby is huuuuge. He was born in the 98th percentile for length and has stayed there for the past 8 months. Vests… do not fit for very long. If this is your problem, you can either buy the next size up (which won’t fit around the tummy) or extend the ones you currently have. You can buy vest extenders but why buy what you can make?

So here’s the quick and easy way to make your own vest extenders: 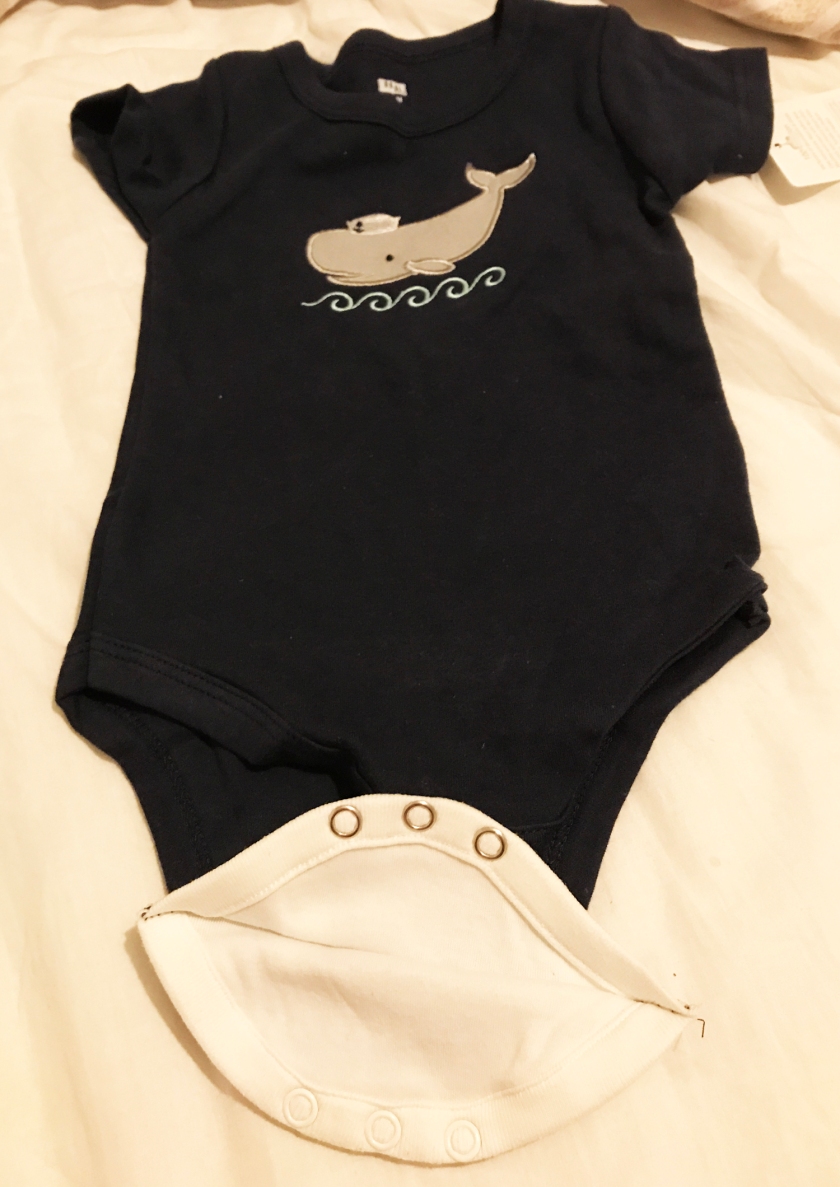 Simple! Have you any tips for tall babies?

We’re starting a bit of Montessori right now, particularly in the way of getting Jellyfish to play with toys that show him how to sort, organize, or how things work. If you’ve looked into implementing Montessori in your playroom (or in our case, the square metre of floorspace in the living room where Jellyfish can play safely), you will know already that those toys are expensive. They are also not very versatile. So I am planning to make him some toys, and this is the first one I did.

I came across the idea of a posting toy, where it’s basically a cardboard box with a slot that kids can put objects in. Jellyfish isn’t really at that level, yet. So I flipped it around. Instead of posting things, he can pull them out. He loves opening things or taking them apart and he especially loves pulling all the tissues out of boxes if they’re left in his reach.

I originally thought play scarves could go into the box, but all the ones I’ve seen on Amazon are unreasonably expensive for what amounts to a few flimsy strips of fabric, and delivery is like end of June, by which time Jellyfish will be into something new, I’m sure. So I got an empty tissue box and some old baby vests that a) don’t fit him and b) have no other use. I can’t give these vests away because they are stained and no one wants stained second hand anything, and anyway the whole world is on lockdown so it’s hard to buy/sell/exchange preloved items. 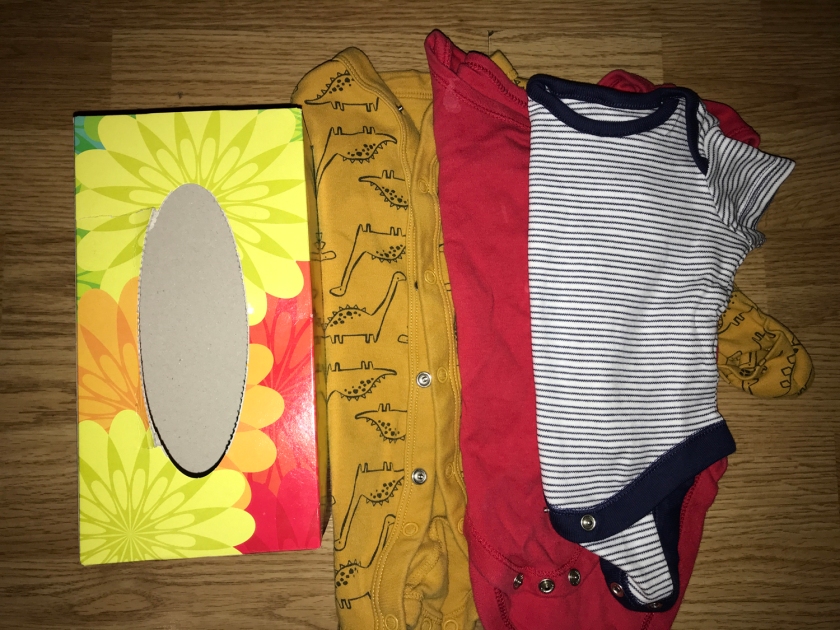 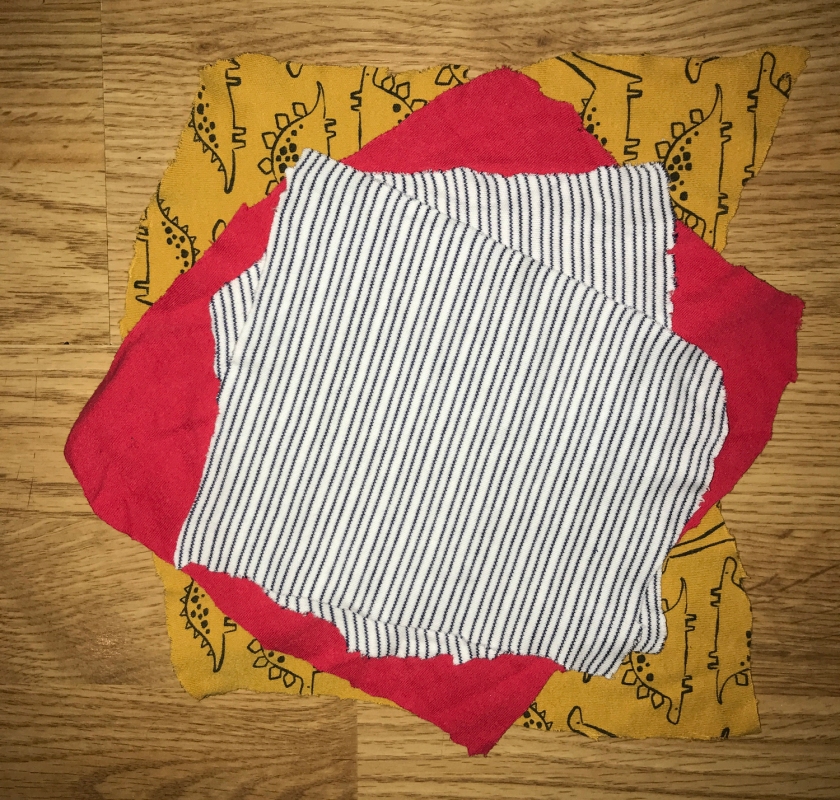 I cut the baby vests into squares. Pinking shears would have made a neater edge but we don’t have that luxury right now. Then I folded them into the tissue box so they would come back out again without him having to make much effort. It took like 5 minutes to make this toy so parenting effort = zero.

I have placed all the “tissues” inside the box and left it on his play mat. I can’t wait to see him playing with this in the morning! So they aren’t that filmy, flimsy scarf fabric that looks so shiny in all the baby sensory pics. I don’t know that he will care as long as he has a box full of things he can take apart. And in terms of sustainability, it has saved a tissue box and three stained baby vests from landfill. I am parenting like a boss tomorrow.

Full disclosure: Today was actually a total washout as Jellyfish has 5 teeth coming in and he is in a lot of pain and crying. Today was a TV day and I justified it by putting on Octonauts in French dub because that’s then educational, right? Yeah, you can change the language on Netflix via the subtitle menu and it alleviates my guilt. But tomorrow will be epic. And if not, there is wine. Which is also French and therefore educational.

One of the most fun things I did while I was in the US was to make my own avocado face mask. It was SUPER moisturizing and all you need are these things:

Open your avocado by cutting around it in a circle from top to bottom then from bottom to top. Twist the avocado, and pull it apart. You should now have two neat halves of avocado (no drama).

Scoop out the insides from half the avocado (ignore that big seed in the middle). Put it in a bowl, if you’re using a hand blender, or put it straight into the jug/container for your blender/smoothie maker/food processor.

Make sure that rosemary is finely chopped. You don’t need much of the stem. When it’s all chopped up, there should be about a big teaspoon’s worth. If not, you may need to chop up another sprig. I use scissors to chop herbs because they don’t seem to cut as easily with knives. Add it to the blender.

Blend the ingredients until they have formed a smooth, creamy paste. If your avocado was unripe, it won’t turn creamy, in which case, add about a tablespoon of coconut milk and blend it again. Luckily, if you put it on your face before you realize (like I did… the hazards of inventing recipes I guess) you always have another half an avocado to work with. 😉

Now it’s ready, apply to your face and leave for 10-15 minutes. I found cotton wool helped remove it. As well as eliminating dry areas, I also found this face mask really helped my skin with redness. This mask gets very messy, though, so make sure you’re not wearing anything that might stain with avocado, and I applied it with my fingers, and then I couldn’t take any pictures because the avocado got all over my nails so I couldn’t unlock my phone!!

If I did it again I’d buy a better skirt because this one had gaps that were too wide and there is no WAY that it would fit anyone bigger than a 10 (US6). Additionally, they listed it as white and it’s *blatantly* cream so it clashes a bit with the top. These things don’t show up in the photos (because the skirt doesn’t really show up in the photos. I am wearing it in every picture and throughout the video, and it’s floor length).

I am actually thinking of buying a better skirt, but I already bought that one, and it’s not worth paying the return postage because it’s going to be nearly as much as the skirt was.

I would also get a top in a size 18 instead of a 16 because the advice on buying baggy clothing was lacking and I was worried I’d be lost in the longer sleeves which was redundant thinking.

Oh well, I am still very proud of this cracking tutorial, so here’s the video of how I did it:

I’ve made some comedy videos of Princess Leia (because a 7 hour tutorial ought to be used for something longer than just the tutorial) doing random stuff, they will be on Youtube pretty soon.
I’ll link them when they’re up.